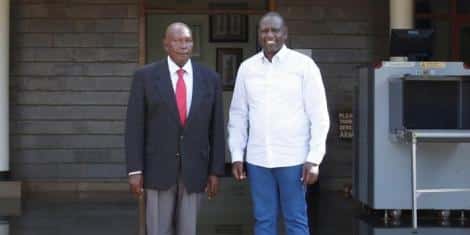 The meeting held at Ruto’s official Karen residence, caught many by surprise considering the strained relationship between him and Baringo Senator Gideon Moi.

“Down memory lane with veteran journalist and former director of the Presidential Press Service Lee Njiru. His is a story of consistent brilliance, illustriousness, commitment to quality, loyalty and dedication to service,” Ruto announced.

The post fueled suspicion on whether Gideon had fallen out with his father’s trusted sidekick.

“Former president Moi’s right-hand man. I guess Gideon Moi has already abandoned him thats why he is running to safety,” suggested Jamal Omwanda.

Others wondered whether the DP had buried the hatchet, since Njiru had thwarted Ruto’s attempt to meet the late former president in 2018 and again in 2019.

“Unfortunately, this (Ruto’s visit) coincided with the time Mzee Moi was undergoing routine physical exercise with his doctors,” a statement from Njiru’s office read.

As the Baringo senator read a long list of people who, according to him and the Moi family, had played a key role in terms of helping during his father’s illness as well as those who worked for him in his retirement, Njiru’s name was conspicously missing.

Kenyans also claimed that the long-serving secretary was a member of the Moi family.

After Moi’s death, social media users were quick to point out that Njiru, who made appearances on TV interviews, resembled a younger Moi.

During an interview on Citizen TV’s JKLive, he refuted the claims and explained that he looked more like Mzee Moi’s younger brother and not a son.

“I was born in 1949 in Embu, Mzee Moi had not been to Embu during that time. I look like a younger brother not like a son,” he explained.

DEVOTION: A HOLISTIC APPROACH TO SUCCESS IN LIFE!