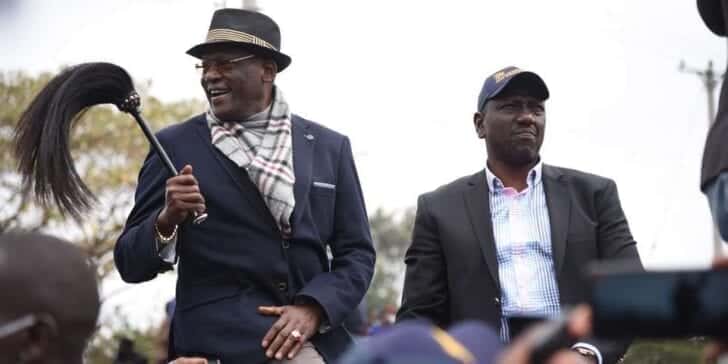 Deputy President William Ruto surprised his supporters from Makueni county on Thursday, September 17, after he publicly made a phone call to them speaking in fluent Kamba language.

The second in command is known for his close association to the so-called hustlers and he once again bonded with the ordinary citizens through a phone call that was put on the loudspeaker for all and sundry to listen to him.

The viral video was shared by Ruto’s newfound ally Johnson Muthama who previously served as the Machakos senator.

“DP HE @WilliamsRuto surprised delegates from Makueni when he called to check on how the meeting was fairing on,” Muthama tweeted.

DP H.E @WilliamsRuto surprised delegates from Makueni when he called to check on how the meeting was fairing on. https://t.co/VdBO9uz1Ya via @YouTube

The DP began his address by sending his greetings in Kamba and said he had talked to several leaders from the region on how they would take the country forward ahead of the 2022 General Election.

“You know me as a hustler, I understand the challenges faced by the common mwananchi. As such, we need to plan together on how we are going to propel this country forward. I will soon invite you (delegates) to my office so that we can share a cup of tea and strategise ahead,” he said amid claps from residents.

He added: “I very sincerely appreciate you support and I want to promise you I will not let you down. I will set the date so we can talk face to face,” the DP said.

Muthama had hosted over 100 elders and local leaders from Machakos and Makueni counties at his Mua Hill home. The group endorsed Ruto and promised to campaign for his presidential bid ahead of 2022. The former senator was also crowned a Kamba elder in a political move that could shake grassroot Ukambani politics.

B-CLUB, Nairobi’s New VIP Club Where You are Poor if You Spend Less Than Sh1 Million