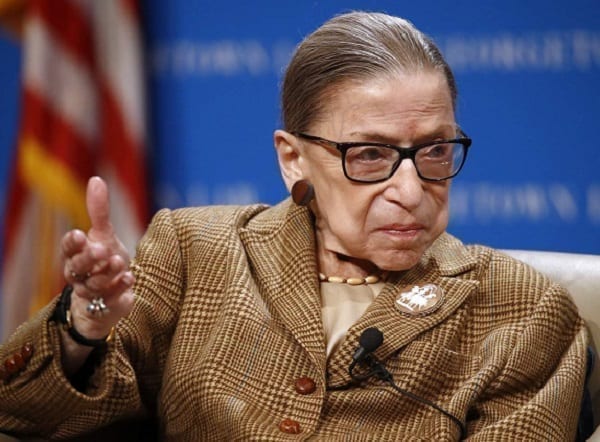 A furious battle over a Supreme Court vacancy is arguably the last thing the United States needs right now.

The death of Justice Ruth Bader Ginsburg today represents a devastating loss for feminists who held up the 87-year-old as an icon of women’s rights, and as a bulwark protecting abortion rights and a wide range of other progressive ideals on a conservative Supreme Court. The Brooklyn-born jurist became one of the nation’s foremost advocates against gender discrimination as a lawyer for the ACLU, decades before President Bill Clinton appointed her to be the second woman to sit on the high court.

But her passing less than two months before the presidential election also tosses one more lit match into the tinderbox of national politics in 2020: It will surely inflame a deeply polarized country already riven by a deadly pandemic, a steep economic downturn, and civil unrest in its major cities.

In Washington, the vacancy fight could ratchet up tensions to a level unseen even in the tumultuous Trump era. President Donald Trump will be eager to fill Ginsburg’s seat immediately, seizing an opportunity to rally his base before the election and to cement his legacy in the event that he is defeated in November. He could also become the first president since Richard Nixon to install three justices on the high court in a single four-year term. Senate Majority Leader Mitch McConnell has already indicated that he’s ready for another confirmation battle, either before or immediately after the election. Republicans might be hard-pressed to consider and approve a Trump nominee in the eight weeks before November, but even a victory by Vice President Joe Biden and a Democratic takeover of the Senate might not prevent Trump from successfully appointing another justice. Republicans would still control both the White House and the Senate until a new Congress takes office in early January.

Ginsburg made her own desire clear in the days before her death, NPR’s Nina Totenberg reported today. She dictated a statement to her granddaughter that read: “My most fervent wish is that I will not be replaced until a new president is installed.”

Whether that final wish will be granted is unclear. McConnell has insisted that the precedent he created in denying former President Barack Obama’s nomination of Judge Merrick Garland in the final year of Obama’s term—to fill a vacancy that occurred nearly nine months before the 2016 election—no longer applies, because the same party controls both the White House and the Senate majority. “Oh, we’d fill it,” the Kentucky Republican promised in May 2019, more than a year before Ginsburg announced the cancer recurrence that would take her life. He reiterated that position in the hours after Ginsburg’s death was announced, saying American voters had given Republicans a mandate to fill judicial vacancies by expanding the party’s Senate majority in 2018. “We will keep our promise,” McConnell said in a statement. “President Trump’s nominee will receive a vote on the floor of the United States Senate.” Never mind that the rationale McConnell gave in 2016—that voters should have the chance to weigh in on their next Supreme Court justice—would seem to apply even more strongly during an election in which the first ballots have already been cast.

The more salient question is not whether McConnell would try to confirm Trump’s nominee but whether his GOP majority would go along with it—either before the election ends in November or in a lame-duck session of Congress afterward. A number of Republican senators have already said they’d want to fill a Supreme Court vacancy while Trump is still in office. But McConnell would need the votes of 50 out of his 53 members to allow Vice President Mike Pence to break a tie (assuming all Democrats voted against Trump’s nominee), and the numbers may not be on his side. One Republican, Senator Lisa Murkowski of Alaska, voted against the president’s last Supreme Court nominee, Brett Kavanaugh, who won confirmation by a single vote in 2018. Another, Senator Susan Collins of Maine, supported Kavanaugh but is now in danger of losing her bid for a sixth term this fall. And a third Republican, Senator Mitt Romney of Utah, voted to convict Trump during the president’s impeachment trial earlier this year; having already tried to remove Trump from office, Romney might be disinclined to give him another lifetime appointment to the Supreme Court.

The Supreme Court has now seen three vacancies in the past five years. Because of her age and ill health, Ginsburg’s is the least surprising. But it may be the most consequential. Justice Antonin Scalia’s 2016 death did not change the balance of power on the court (he was replaced not by Garland but by the conservative Justice Neil Gorsuch), and Kavanaugh is only somewhat more conservative than the justice he succeeded, Anthony Kennedy, who was an appointee of President Ronald Reagan. Should Trump pick Ginsburg’s replacement, however, the ideological shift rightward it represents would likely be the largest for a single Supreme Court seat since the conservative Clarence Thomas succeeded the liberal Thurgood Marshall nearly three decades ago. And that opportunity could be too enticing for Republicans to pass up.

McConnell, backed by the Senate Republicans who have ratified his decisions, has shown above all a willingness to wield power to its fullest extent when it comes to the federal judiciary, to interpret as widely as possible the Constitution’s delegation to the Senate of the authority to “advise and consent” on presidential nominations. He cares more about the confirmation of conservative judges than anything else the Senate does, and historically, conservative leaders and voters have seemed to care more about the judiciary, and the Supreme Court, than their progressive counterparts. Republicans saw the vacancies on the high court during both the 2016 and 2018 elections as boosting their base’s turnout, including in key Senate races, while Democrats were unable to parlay the anger over McConnell’s handling of Garland into sufficient turnout to elect Hillary Clinton or a Democratic Senate majority four years ago.

Republicans may hope the vacancy caused by Ginsburg’s death will have the same mobilizing effect this year, especially in states such as Arizona, North Carolina, Iowa, Maine, and Colorado, where both Trump and GOP Senate candidates are at risk of losing. But the Ginsburg seat holds even more significance for Democrats, who have panicked about her health scares and advancing age for years. They fear not only the rollback of progressive gains—including restrictions on abortion rights and the possible invalidation of the Affordable Care Act—but also the potential that a 6–3 conservative majority could hand Trump virtually unchecked power or overturn any major achievement a President Biden could hope to accomplish. The vacancy thus might provoke the turnout boost for Democrats that previous court battles did not, as well as a push for retribution if Republicans are seen as ignoring the will of the voters. A successful GOP effort to replace Ginsburg with a conservative before or immediately after a Democratic victory will almost certainly lead to more progressive calls for Biden—along with a willing Democratic Senate—to simply pack the Supreme Court with more seats to offset the conservative advantage.

The stakes of the next two months—with hundreds dying daily from the coronavirus, with an incumbent president fanning violence and undermining the integrity of a national election—could hardly have been higher before Ruth Bader Ginsburg succumbed to cancer. Into that cauldron now goes a Supreme Court fight, with an outcome that could alter American society not only for the next four years, but for a generation to come.