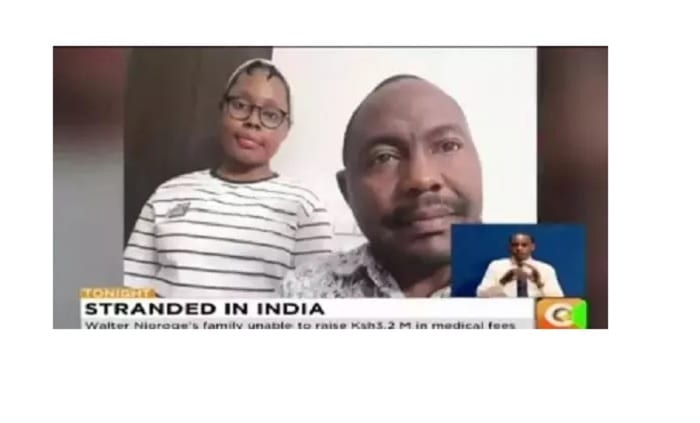 A family from Chuda, Mombasa has been stuck in India for one and a half years after falling in debts while catering for the medical bills of an ailing daughter.

The family is struggling to clear a medical bill of Ksh.3.2 Million after being slapped with a bill of Ksh. 11 Million following their stay in the Asian country.

WATCH THE VIDEO ON HOW TO HELP.

Walter Njoroge left Kenya back in 2019 to seek medical assistance after his daughter Fiona Wanjiku developed a kidney problem while still in form one.

“We have overstayed in India and now we are overwhelmed financially. We have gross running expenses of over Ksh.10 Million, thankfully the medical cover catered for most of the bill.

“We have expenses of covering for new tickets because the initial ones expired and we also have daily expenses,” said the father.

One of the family members back in Mombasa revealed how much the family uses in medication and how they borrowed money from a friend in India.

“We had to borrow from friends to clear the hospital bill, Wanjiru and Walter now have the friend’s debts, hotel arrears and pharmacy debts

“Fiona is using expensive medication because she uses up to Ksh.40,000 per week and if it was back here in Kenya it would have cost up to Ksh. 100,000,” noted one of the family members.

The 16-year-old had to undergo two surgeries while in India to correct her kidney problem with the second one being successful.

The family back in Mombasa have had to endure a difficult time while the father and daughter have been in India as debt continue to affect them.

Their home in Chuda has been locked by the landlord after failing to pay rent for the one and a half years that they have been in India.

Most of the money that the family is now using to cater for their basic needs is coming from well-wishers.

VIDEO: Kenyans in Italy,UK and US share experience during lockdown