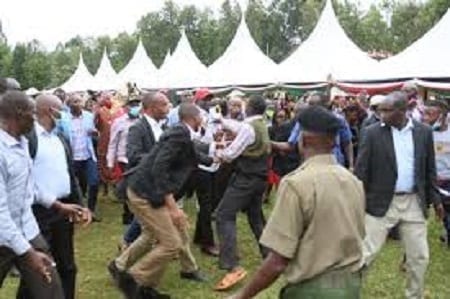 Deputy President William Ruto’s security details on Friday, October 30 roughed up a man after he attempted to attack the DP during his Muranga visit.

The unidentified man tried to attack DP Ruto as he was leaving youth and women empowerment event at Rurii Stadium, in Mathioya.

In the photos posted by the Standard, the man walked towards the deputy president and confronted him as he was heading to his vehicle.

He then lifted his hand in what can be seen as an attempt to attack Ruto but the DP’s security swiftly responded and pinned the man on the ground. The DP, who took a step backward as the man approached him angrily, just smiled with a gesture after his security neutralized the man.

He was then escorted to his car and proceeded Othaya Town where he held a similar meeting.

However, DP’s Communications Secretary David Mugonyi denied such reports saying tha there was no attempted to attack on Ruto in Muranga. “Deputy President had earlier on been presented with chicken by an elderly woman and the man was following suit with a gift of tea leaves but was stopped by the bodyguards who did not know what he was up to and was later released.” Mugonyi told the Standard.

DP Ruto, Ngunjiri Face Off in front of Nyeri Crowd