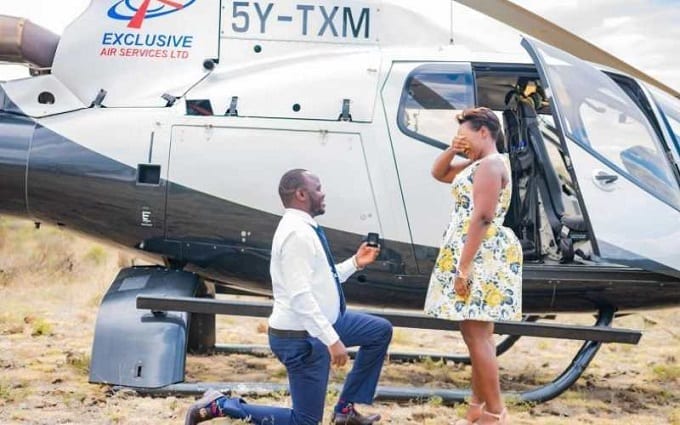 Isn’t love just beautiful? These Kenyan celebrities have gone above and beyond to ensure they proposed in the most romantic ways. From hiring choppers to surprising their spouses in the busy streets of Nairobi, here is a list of celebrities whose marriage proposals have stuck with netizens.

The youthful politician recently took social media by storm after hiring a chopper and flying his girlfriend, Caren Ruto to Magadi to ask for her hand in marriage. Kimutai shared pictures of the overly excited yet shocked Caren on social media with the caption, “She said yes!”

Sharon Mundia ‘This is Ess’

In 2015, award winning lifestyle blogger Sharon Mundia’s then boyfriend, Lonina Leteipan, a youth banking manager at Chase Bank hired a chopper and flew her to Mt Kenya where he went on one knee and asked for her hand in marriage.

According to reports Lonina convinced Sharon to go for a weekend getaway with him explaining that they would use the content shot for her blog, to which she agreed. The couple landed at Lake Michaelson, where Lonina gave a speech before pulling out the ring and she said yes.

The love birds then proceeded to Fairmount Mt Kenya Safari Club where they celebrated the engagement with their close family and friends.

A year later, Sharon and Lonina exchanged vows at a private wedding ceremony at Medina Palms on Watamu beach.

The two were blessed with a daughter but unfortunately parted ways soon after.

Popular Sauti Sol band member Bien Aime Baraza rented out the entire Westgate Mall cinema so as to propose to the love of his life Chiki Kuruka.

The excited Chiki could not hide her joy, taking to social media soon after to share the news with her fans.

“I was not expecting this at all! Hiring out a cinema, all my family and friends involved. Thank you, thank you. Easiest yes I’ve ever said. To my homie, my best friend and sh** my fiancé, I love you,” wrote an excited Chiki.

Rapper King Kaka proposed to his wife, Nana Owiti in front of thousands of spectators during his Eastlando Royalty album launch back in 2018.

King Kaka asked his wife to join him on stage where he professed his love to her before pulling out the ring and going down on his knee.

“Namuitanga wife na hananga pete. Will you be Mrs Ombima,” he said, to which the visibly shocked Nana said “Yes” as the crowd cheered.

Just like King Kaka, The EMB Records boss opted to propose to the love of his life in front of a multitude of people and she said yes.

The grand proposal took place about a year ago at the Thika Municipal Stadium where the singer was performing and the ceremony live streamed for everyone to see.

“Everyone knows that Diana and I are an item. Everyone knows that she is my one and only but never has anyone heard or seen me propose to her, something I consider a very important process. A man can do a traditional wedding but one needs to put a ring on it. We are taking a step at a time,” said Bahati.