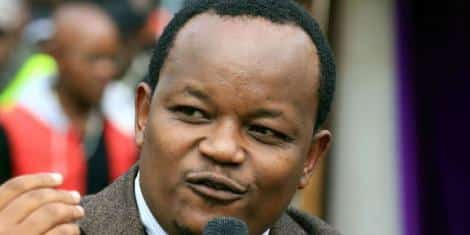 Nyeri Town MP Ngunjiri Wambugu responded after he was jeered and booed in his own constituency during a visit by Deputy President William Ruto on Friday, October 30.

In a statement, the MP accused the Ruto brigade of throwing sanitized jabs at him as he stood by while the crowd jeered him.

“If you ever wondered what the spark of resistance looks like, then you had a front-row seat as the DP and all his minions took on one man, a first-term MP, who kept silent with each insult and whose stance never changed.

“When they were done they drove off and celebrated their efforts believing they had wounded their foe,” Ngunjiri stated.

Wambugu, who is one of the DP’s fierce critics, added that Ruto tried to hide his lack of composure by asking him to relax even when he was composed.

The MP alleged that his tussle with the DP begun when he started driving the Kieleweke agenda, which he stated was a call to stop early campaigns.

The narrative, Wambugu claimed, called for the DP allies to respect the president and dismiss a narrative that Central Kenya owed a debt to the DP.

“Could today be the day Mt Kenya starts hardening against the Deputy President?” he posed.

“Just like with Kieleweke, could what Wambugu did today in his peaceful one-man resistance in a mobilized rally by the Deputy President end up being the beginning of similar action across the Mt Kenya region?”

The DP introduced Wambugu, who was part of a crowd on Friday, but was forced to change the topic when the crowd started jeering Wambugu.