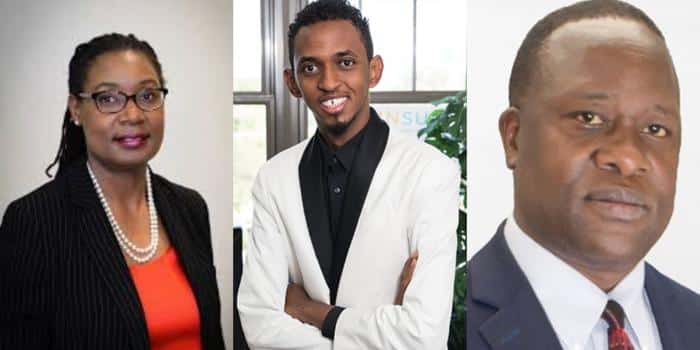 As the whole world turns its attention to the hotly contested US elections pitting Trump against Biden, three Kenyan-born politicians sought elective seats in the state of Minnesota.

The Kenyan-born Americans were seeking to change the narrative and champion the rights of the minorities. The candidates though, failed to secure the three seats

We look at the three Kenyan-born who contested in the state of Minnesota.

Henry Momanyi contested in the Brooklyn Park City Council seeking to be a representative in the West District as an independent candidate.

He advocated for improving police relations and addressing the larger issue of systemic racism through dialogue.

“They (city council) must invite all stakeholders and interested parties to the table and adapt remedial steps in the short run which would see bad policing methods such as use of violence dropped, and in the long run, adapt better policing methods through mitigation process.

“I would also like to see police enforcement which is diversified and reflects the community that department serves,” he stated.

He lost to the incumbent Susan Pha.

Dakane vied for the council seat in the city of Edna, Minnesota with a drive to improve policies meant to initiate change among the youth as well as advocate for minorities.

In 2018, he had received the Leadership Community Award from the Edna Community Foundation for his youth project which grooms them to be ambassadors and community leaders.

The Kenyan born entrepreneur, who had moved to the US in 2013 to be with his wife and two daughters, currently runs a non profit organization that champions for the opportunities of immigrants to find employment.

Kitui also mirrored Dakane’s quest by vying for a council seat in the city of Edna, Minnesota. Her rallying call was driven by improving housing policies to enable affordable housing for all.

“Now is the time for us to engage in meaningful system changes. We have to commit to adding affordable housing, sustainable growth and improved racial equity in our city.

However, it was not all doom and gloom as former Kenyan refugee Ilhan Omar, shattered glass ceilings after securing her reelection to the U.S. House in Minnesota’s 5th Congressional District against Republican Lacy Johnson. Her gusto for championing equity rights for the minority in America saw her rise through the ranks in American activist groups.

This then led her to engage in politics and during the 2018 elections, she edged out Jennifer Zielinski and Bob Carney Jr to secure the seat.

Why Kalonzo and Wiper Movement are in Cord to stay

KCSE: Year of the boys-Not a single girl listed on top 10