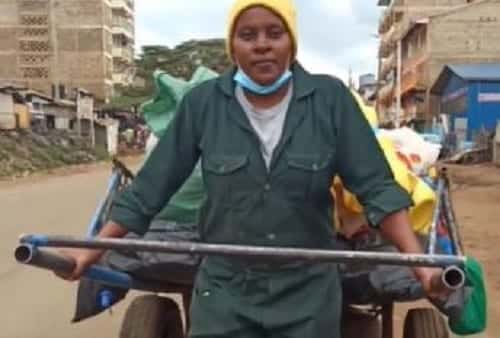 A Kenyan woman Grace Wangechi who has a degree in Aeronautical Engineering is an extraordinary woman who despite her education is doing what others with similar education will  not do.

US President Abraham Lincoln is attributed to have said, “Things may come to those who wait…but only the things left by those who hustle.”

True to the famous phrase, those who make plans and work hard at achieving their goals have higher chances of success.

For Grace Wangechi, missing out on formal employment forced her to innovate and venture into a different field.

In an interview with Kenyans.co.ke, the mother of one disclosed that she was not successful in landing a job after graduating with a degree in Aeronautical Engineering.

“I tarmacked for two years and then decided to move to Kasarani in 2012,” she stated, opting to start a garbage collection business.

It is at that time that the mother of one started cleaning services by collecting garbage from a handful of houses within the estate.

“I started with a wheelbarrow and later moved to a handcart which I used to rent,” she stated.

Wangechi grew the business as she expanded to several houses in the area collecting garbage three to four times a week.

Later on, during a meeting with other women in the area, the name Mama Safi was birthed. Her business has also provided employment to young men in the area.

“I have three people who also collect garbage and I pay them KSh800 a day,” she revealed.

Mama Safi also ventured into the recycling of plastic materials before dumping other waste at a nearby dumpsite.

She explained that among her challenges was when her eight-year daughter learned that she was a garbage collector from a classmate.

“She wanted me to have a job where I go to the office and carry a handbag but I explained to her the situation and eventually she came to understand,” the businesswoman stated.

Video:Betty Bayo fails to show up for KTN interview