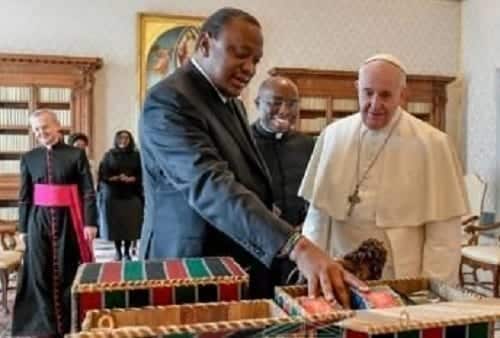 Pope Francis gifted President Uhuru Kenyatta with a mosaic and four bottles of oil produced by the Vatican in Loreto, Italy, after the two held a private meeting at the Apostolic Palace.

The two delegations discussed several subjects of mutual interest between Kenya and the Holy City among them education, health, regional peace, and security as well as the fight against Covid-19.

President Kenyatta in return presented priceless gifts to the Holy Father in a show of good faith and a norm for Presidents who visit the Papacy.

The Head of State first gifted His Holiness with Kenyan local made goods, wrapped in colours representing the Kenyan flag. Black, white, red and green.

He also offered a symbolic sculpture of a lion protecting its cubs and a photo book with Kenya’s rich history engraved in it.

The book had photos published in black and white with subtitles to explain the events within.

Kenyatta also presented a photobook of the Pope’s 2015 tour in Kenya. The book had photos of dignitaries the Pope met and events he graced.

The head of state further gifted the Pope with tea and coffee from Kenya as well as walnuts.

The President made history as the first Kenyan Head of State to make an official visit to the State of the Vatican City.

He was accorded a full Apostolic Palace State reception including a guard of honour mounted by the Swiss Guards which is an army of 135 highly trained marksmen drawn from Switzerland.

The guards are charged with the responsibility of protecting His Holiness the Pope and guarding the Apostolic Palace.

“This visit is extremely rare. The reason that it is rare is that it is not usual for the Holy Father to have an audience with just any Head of State. He values the role that our President is playing in very many aspects,” Kenya’s envoy to the Vatican Prof Judi Wakhungu stated.