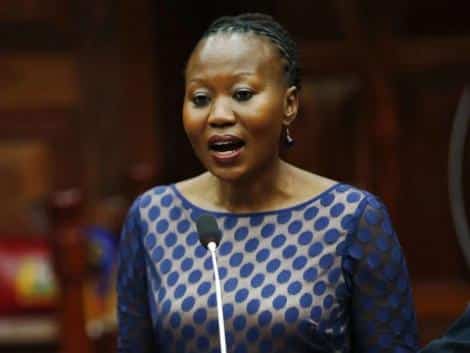 She posted a photo of her with a badge written, “Union County Board of elections.. board worker” and captioned ” It is always an honor and pleasure to serve,” revealing her role in the US elections.

This elicited mixed reactions among Netizens who likened her current role to the controversy that surrounded the 2017 elections.

“I’ve not heard President Trump claiming faulty errors among the servers. That is the only point he is missing.

“The only transparent Former IEBC commissioner I trusted. Kudoz Roselyne. God keep you safe and in good health,” read some of the tweets.

The union County Board of Elections is mandated to ensure that all elections conducted in Union County are within strict compliance with the State law. In essence, the board guarantees the right to suffrage for all voters within the County.

Dr. Akombe had fled to the US following the contested 2017 presidential elections which were nullified by the Office of the Chief Justice.

She cited crooked dealings and massive corruption at the commission led her to resignation and soon after she left the country ahead of the repeat 2017 elections.

She noted that mysterious circumstances surrounded the results displayed at the Bomas of Kenya raising her suspicions of the commission’s transmissions system.

Furthermore, Akombe, on July 29, had announced that she was ready to spill the beans by providing her testimony on the unsolved murder of her former colleague and ex-ICT manager Chris Msando.

She however claimed to have received threats from the commission’s former Chief Executive Officer Ezra Chiloba.

“Do not attempt to rewrite history. Our silence is not your license,” read a text email from a screenshot shared by Akombe.

Citing the alleged warning, Akombe argued that it was ever more necessary for her to testify in the independent judicial inquest into the murder of Msando.