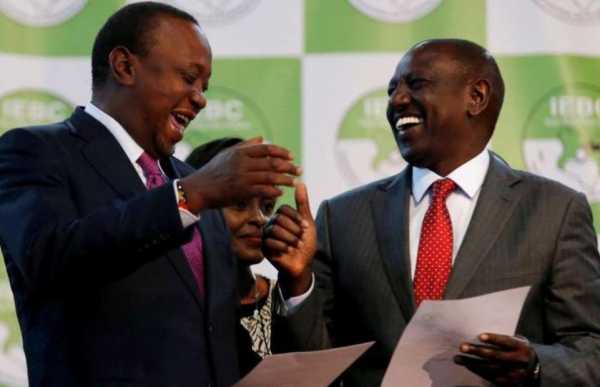 This possible compromise comes despite claims by some proponents of the Building Bridges Initiative process that there is no window for any changes to the published bill.

It appears President Kenyatta is engaged in behind-the-scenes manoeuvres to ensure Ruto boards the BBI train.

Ruto has claimed the Constitution of Kenya (Amendment) Bill, 2020 can be amended to address his concerns for a win-win situation in the referendum. He calls for an uncontested plebiscite.

Ruto’s concerns as well as pressure by Uhuru’s handshake partner Raila Odinga’s camp that the bill is closed have pushed the President into a corner.

It has emerged that in order to accommodate some of the DP’s reduced BBI demands, the Bill might be republished after some minor changes are made.

The Star has established that a 12-member team leading consensus talks from Kieleweke and Tangatanga has made significant progress.

The President’s team of six negotiators is led by Senate Majority Whip Irungu Kang’ata, while the DP’s faction is led by Gatundu South MP Moses Kuria.

On Tuesday Kang’ata told the Star they are exploring options to address the DP’s conditions, including sponsoring legislative proposals in Parliament.

“We are exploring legislative remedy to their concerns,” Kang’ata said when asked how they intend to address the DP’s issues.

“We are thrashing out issues and we hope to finalise by Thursday,” he added.

Ruto’s camp has tabled three demands including review of the Equalisation Fund sharing formula, election of the 47 woman representatives to the National Assembly and a multi-choice referendum.

They dropped other demands, including holding the BBI referendum and 2022 General Election on the same day.

While two of the DP’s issues can be addressed through legislative interventions, the 47 woman representatives issue might require the BBI Bill be altered.

The current BBI constitutional amendment proposal provides that the woman representatives currently in the National Assembly be moved to the Senate.

Kuria, who is Ruto’s lead negotiator, insisted the DP’s side hopes that a deal can be reached without hurrying the BBI process.

“The ball is in their court. We have submitted our issues during the meetings and we hope these issues will be brought on board so we don’t have to go into a divisive referendum,” Kuria said.

He added, “I hope wisdom prevails before Friday. We have no problem going per the current signatures collected if we agree.”

He said they are not ready to back down on their demands and want all of them fulfilled if there is to be any consensus.

The BBI secretariat co-chaired by Suna East MP Junet Mohamed and Dennis Waweru last week had said they would present the BBI signatures to the IEBC by Friday.

When asked if the negotiators had made progress, Kuria said he is yet to “see white or black smoke” in consensus building but said, “There is room.”

Concerns emerged, meantime, whether a bill to amend the Constitution by popular initiative can be amended after signatures have been collected.

Constitutional expert Bobi Mkangi said the BBI Bill can be amended as long as it has not been submitted to the electoral commission for signature verification.

“Once submitted to the IEBC with at least one million signatures, that is when the legality can be triggered. As the Bill is now, it can be amended by the promoters,” Mkangi told the Star.

The DP’s team is said to have demanded the number of MPs be capped at a maximum of 504 – with only six to be nominated, including three women.

Ruto’s camp says the rest of the lawmakers in Parliament should be elected, including 47 woman representatives in the National Assembly and 47 in the Senate.

This is on top of the 360 constituency representatives.

Details of the ongoing talks reveal the President’s signals to yield to some of the demands being pushed by the DP’s camp as part of efforts to build consensus on the referendum.

Obama calls Uhuru,assures him he will visit Kenya