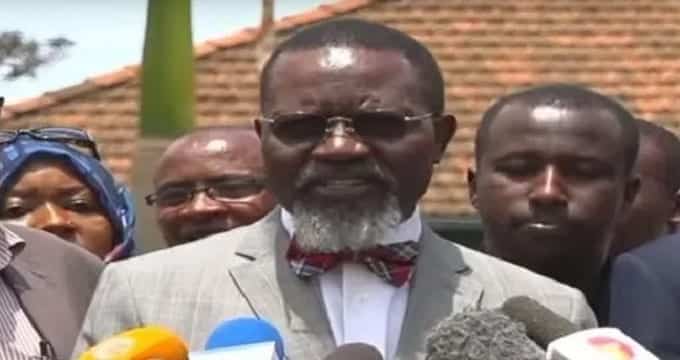 Former Kenyan Diaspora and 2012 Presidential aspirant  George Wajackoyah fired his lawyer on the spot during a heated court session.

Wajackoyah, a former police officer who rose through the ranks to become a professor of law, was testifying in the case pitting two brothers, former Tetu MP James Ndung’u Gethenji and his elder brother Frederick Gitahi, over the ownership of the Ksh20 billion Kihingo estate in Kitisuru, Nairobi County.

He was been interrogated by Gethenji’s lawyers, Willis Otieno and Ishmael Nyaribo, when he lost his cool and fired his lawyer on the spot.

“You stand sacked. Leave. You cannot sit there and watch when I am being intensely grilled by defence lawyers instead of protecting me,” he told the lawyer identified as Ikua.

Justice Martha Mutuku intervened and allowed Ikua to sit through the rest of the case. However, Ikua walked out of the court minutes later.

Gethenji’s lawyers interrogated Wajackoyah over an assault case in which Gethenji and four others allegedly interfered with renovations at the Kihingo estate on July 2, 2019.

Wajackoyah detailed that he was attacked alongside a homeowner in the estate, Varsan Dhanji.

Nyaribo also accused Wajackoyah of fighting the attackers instead of contacting the police.

In response to this, Wajackoyah disputed the claims noting that he made attempts to contact OCS Gigiri and the Deputy Divisional Criminal Investigation Officer (DCIO) Gigiri.

“The OCS Gigiri drove into Kihingo but he ignored me. He walked away. I also called the Deputy DCIO Gigiri and reported the incident to him,” he stated.

Gethenji and his brother Gitahi Gethenji have been at loggerheads over the multibillion estate which has been under the control of the family.

In order to seek full ownership of the lavish estate, which boasts of high-cost homes and recreational facilities, both brothers resorted to having the matter settled in court

Kenyan Teen Morara Shot and Wounded during Protests in Minneapolis

Ruto To Miss Mashujaa Day, Will Celebrate It In Belgium