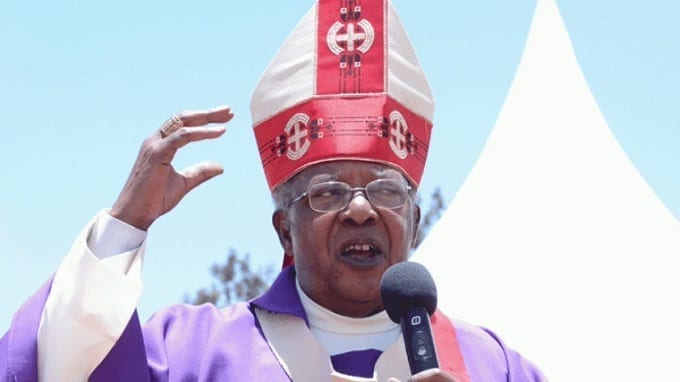 The most consequential Bishop of the Catholic Church in Kenya historically has remains Cardinal Morris Michael Otunga (1971-1997). Cardinal Otunga was part of the clergy who took the helm of Christian leadership from the British colonial clergy engraving the role of the church in Kenya’s society. Otunga was part of the well educated priests who did not see the church within the limited glasses of theology, rather, he understood that the church functions in a society of human beings who live on the earth which is fallen short of the glory of God.

Those who advocate for the separation of Church and State do so out of their desire to govern outside of any moral principles. Moral principles have always been founded on religious thought. Even Greco Roman theory submitted to the idea that man is under the umbrella of the gods. Within the Greek mythology, there are twelve gods who ruled the universe from Mt. Olympus. Even nations like the communist China which operates on an Atheistic philosophy, do recognize the role of religion in its society. These include Buddhism, Taoism, Islam, Catholicism and Protestantism. The thing to note is that Chinese government operates within an amoral philosophy: They do not consider any action or judgment based upon the philosophy of rightness or wrongness of things. They operate on a foundation of utilitarianism: This means they lack moral sense; they are not concerned with whether things are right or wrong. Rather, things are right and wrong if they reflect the political philosophy. That means, if the communist party decides to eliminate certain groups of people for the common good, then they are eliminated, e.g., for the common good, abortion is necessary.

The United States, though advocating for what is called a “secular society” is driven by a constitution whose writers were European immigrants whose foundation was the Church of England and were influenced by the historical development of Christianity. Those who ‘discovered’ North America from Europe were servants of the queen and Roman Catholicism. Therefore even the constitution is ‘biased’ in that it advocates for laws that reflect the historical relationship between governments and the church. It is in this spirit we find the popular American Declaration of Independence and this common phrase, “All men are created equal, and that they are endowed by their CREATOR with inalienable rights.” The separation of church and state is therefore a dream of atheism. It has no principle in the practical world.

For Cardinal Otunga, the church and state merged at the mass. Those who came to take mass every Sunday were men and women who run the State. Tom Mboya was a catholic, the Kenyatta family, outside of president Kenyatta who was a born again Presbyterian, are Catholics. When the colonial government created concentration camps and hauled whole populations into Arthi River, they called upon the church to help them in the management of the humanitarian crisis they had created. Three educated clergymen led by the Rev. Johana Nyenjeri of Kijabe mission became the therapists and counselors. They used the Bible to encourage the detainees. They reminded them that even the Hebrews were once slaves who were freed by God. This mentorship resulted in thousands of detainees becoming believers in Jesus Christ. When they were released, they went back home with the message of grace and forgiveness and helped evangelize their communities.

After Cardinal Otunga passed on, Raphael S. Ndigi mwana a’Nzeki became the dominant catholic Archbishop in Kenya. He was responsible for continuation of the spirit of ecumenism among denominations and churches in Kenya. He saw the church as an organism whose mission supplemented the work of the State. He encouraged catholic education, hospitals and many other contributions to society. He worked together with Protestants to promote Christian Broadcasting through the NCCK. His relationship with Pastor Timothy Kamau of Bibilia Husema Studios Kijabe helped the Catholic secretariat to promote catholic broadcasting with Wanjiku Boro heading that effort.

Cardinal Njue came to the helm during the time of Mwai Kibaki and played an important role in the constitutional process. His insistence on banning abortion and gay marriage in Kenya was an important contribution that echoed a consistent catholic doctrine and the philosophy of his predecessor.

One thing remain true as a negative for the Catholic church in Kenya, and Cardinal Njue added fire to this negative flame: He encouraged drunkardness among the catholic clergy. As an Alcoholic and a chain smoker, Njue contributed negatively in promoting alcoholism among catholic youth. This behavior promoted by the Catholic Church is destroying many families in Kenya.

The pope would do Kenya great good by choosing a non-alcoholic cardinal to serve in the next season. We have enough drunkards in Kenya.