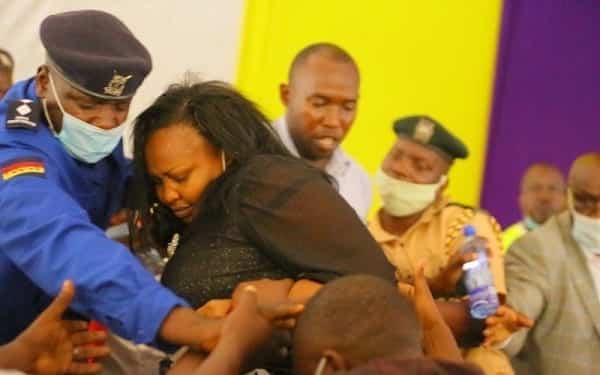 Omanga-They have realised I am no pushover: Nominated Senator Millicent Omanga on Monday opined on an incident where she was denied a chance to speak during a burial in Kisii.

While some leaders present were given a chance to address the gathering during the burial of Kisii Deputy Governor Joash Maangi’s father, Kisii Governor James Ongwae blatantly denied Omanga a chance to speak and a melee ensued.

The nominated senator was evicted from the podium and she later took to Twitter saying she is no pushover.

“Bora wamejua I’m not a pushover. Ama wanasemaje hapo njei?” (Provided they have realized I am no pushover…or are they saying something different).

I Always Thought I Would Be An Accountan-Kisii University…

While some castigated her for her conduct, others jumped to her defense saying the situation could have been handled better.

Nairobi Woman Representative Esther Passaris condemned the manner Omanga was manhandled saying women’s bodies should be respected at all times.

“I am deeply appalled and would like to condemn in the strongest terms possible the manner in which Nominated Senator Millicent Omanga was manhandled yesterday in Kisii.

“No matter which side of the political divide we’re on, women’s bodies must be respected at all times,” she tweeted.

During the same function, Dagoretti North MP Simba Arati’s remarks forced his South Mugirango counterpart Slyvanus Osoro to jump onto the podium when he called on Deputy President William Ruto to keep off the company of leaders he referred to as corrupt.

“We have several leaders here in the company of our Deputy President who have a tainted life. These are fraudsters who should not be allowed to take up any leadership position,” said Arati.

Osoro who spoke before Arati said the BBI Bill had not catered for the demands put forward by the Gusii Community. “We cannot support a document that seeks to benefit a few selfish leaders in the Country.”

Deputy Governor Joash Maangi was forced to take over, calling for calm from both parties.