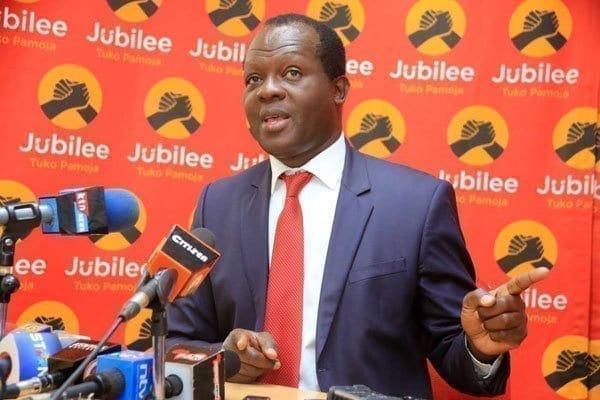 As Coronavirus Cases Rise in Kenya,Jubilee party is busy with politics-Five nominated senators from the Jubilee Party have reportedly been expelled for apparently snubbing the Parliamentary Group meeting convened by President Uhuru Kenyatta on Monday, May 11.

According to a statement from the party released on Wednesday, May 13, Jubilee Secretary-General Raphael Tuju accused the senators of gross insubordination and misconduct.

The statement further claimed that the lawmakers received messages and did not even bother to send apologies for not attending the meeting.

Jubilee Party Senators allied to Deputy President William Ruto have maintained that they were unaware of the meeting that led to the ouster of Elgeyo-Marakwet Senator Kipchumba Murkomen as Senate Majority Leader.

The five senators were among the 22 who appended their signatures on a sheet that disputed the ouster of Murkomen and former Majority Whip Susan Kihika.

The State House meeting was attended by 20 senators including Baringo’s Gideon Moi who is a member of The Kenya African National Union (Kanu) alongside the president and Tuju.

Murkomen and Kihika were ousted after allegedly being accused of not supporting President Uhuru Kenyatta’s agenda.

In their rejoinder, the leaders allied to DP Ruto claimed that the ouster did not follow the law arguing the State House meeting lacked quorum but proceeded with the decision anyway.

Murkomen later claimed that in his decision to uphold the ouster, Senate Speaker Kenneth Lusaka was acting under duress.