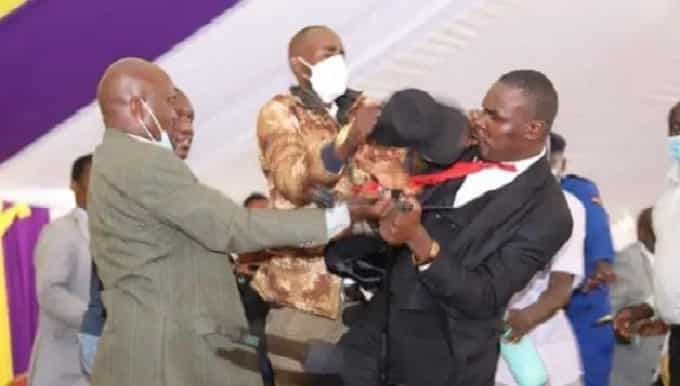 A video seen by Kenyans.co.ke showed an angry Osoro storm the stage after Arati allegedly made disparaging  statements against Deputy President William Ruto who was also in attendance.

The video showed Osoro crashing to the ground as mourners surrounded him and Arati after he attempted to snatch a microphone from the Dagoretti legislator.

Police were forced to intervene during the commotion in an attempt to calm the mourners down.

While speaking at the event, former Prime Minister Raila Odinga took a swipe at the DP for turning his back on the government failures.

He claimed that Ruto formed the government with President Uhuru Kenyatta only to disown the development record that their administration.

When he took the stage, the DP defended his hustler movement and promising to change the economic model.

“I am promising you, we are going to change the economic model of our country. We will stop the tickle down economies. We will do the bottom down economies so that it starts from the bottom,” stated Ruto.

He further noted that his supported elevated the Raila to the prime minister’s position and helped Uhuru Kenyatta clinch the presidency twice.

Raila was accompanied to the event by Kisii Governor James Ongwae.

Maangi mourned his father as a lover of unity for his ability to bring people together.

“I am grateful that this man lying here has brought together all these leaders. He was a great man who loved peace. Let his death unite us,” stated Maangi.

BEYOND ELECTIONS: KENYANS YEARN FOR DEVELOPMENT