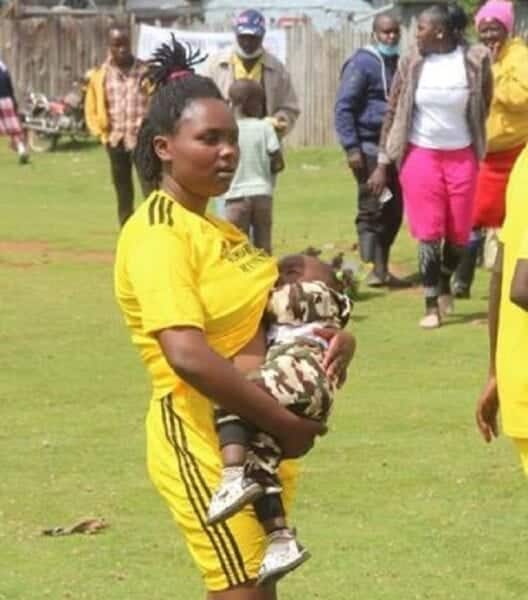 A photo of a footballer who was captured breastfeeding her baby at halftime while dressed in her team’s kit has touched many Kenyans.

“The image was captured during a match between her team Njabini Women and Karangatha women, organised by Nyandarua Woman Rep Faith Gitau to celebrate International Women’s Day,” explained Wangui.

The 23-year-old single mother lives with her grandmother after the child’s father abandoned her. When not playing for the Morvel Dadas, she sells airtime to make ends meet.

Sports personality Carol Radull has announced that she intends to visit Winnie in the company of other football enthusiasts.

The photo showed the need to have designated places where nursing mothers can breastfeed or express milk.

The Breastfeeding Mothers Bill of 2019 makes it compulsory for all persons who own, lease or rent buildings holding at least 50 people to provide a lactation room.

The room, according to the bill should be, “a clean, private facility with a baby changing table, waste bucket and a sign indicating its location.”

Kisumu Starlets FC Team Manager Beryl Monique told Kenyans.co.ke that the moment captured in Winnie’s picture is not new as many of her players often find themselves in similar situations.

“Only a few grounds where women play have changing facilities such as Moi Stadium in Kisumu and Barclays Bank Sports Club in Nairobi,” she said, adding that female players sometimes have to change their babies’ diapers under trees.

Monique regretted that women playing in the premier league did not receive as much help as their male counterparts, adding that oftentimes they had to foot their own expenses due to the lack of sponsorship. 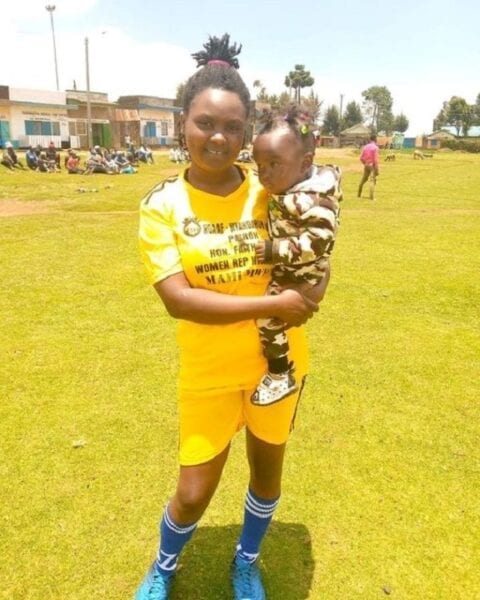 Winnie Wangui Kamau, a 23 year old single Mum who comes from Njambini.
She was feeding her child during a half time break in a match pitting Njambini Women versus Karangatha women.
The tournament was organized by Nyandarua Women Representative Hon. Faith Gitau to mark the International Women’s Day celebrations last Monday.
When not training with her team ‘Morvel Dadas’ Winnie sells safaricom airtime to make ends meet. She lives with her grandmother after her child’s father took off.
#ForTheLoveOfTheGame
Info source : Carol Radull
————————————————————————-
If you would wish to buy milk for her one and a half years old baby, below are her contacts:
M-pesa – XXXXXXXXXX- Email us for phone number
Name -Winnie Wambui Kamau

have pleged a 3 day treat in Mombasa, for mother and baby, everything catered for.