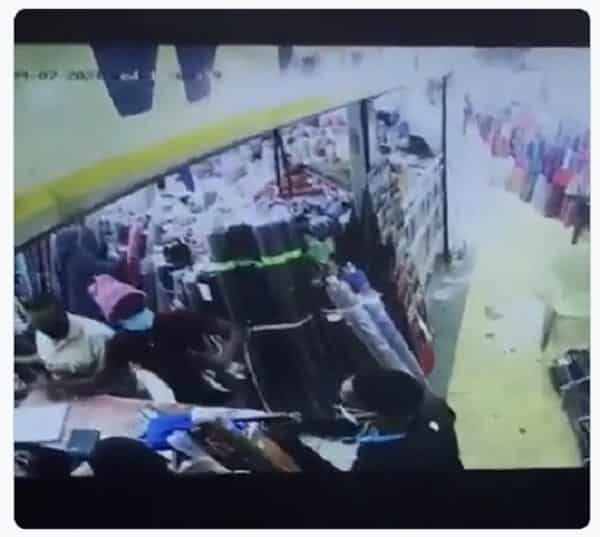 CCTV cameras captured a daring robbery staged by gunmen who entered one of the malls in Eastleigh, Nairobi and made away with cash and other valuable items.

The thugs who were armed with a pistol entered one of the textile stores at United Mall in Eastleigh during the day in the full glare of shop attendants and customers who were robbed of their cash and belongings.

On their way out the thieves spotted an old man sitting by himself opposite the shop they had just stolen from and he became the next target.

One of the thugs tried to grab the man’s phone which he held in his hand but instead of giving in, he fought them off and even attempted to strike the robber with his hand.

The old man demonstrated courage leaving the victims and those who witnessed the robbery in awe.

There has been a sharp increase in the number of robberies reported in Nairobi as well as the rest of the country.

Three cases have already been reported in the past week after the thugs were captured on CCTV cameras.

According to a report by the Global Initiative Against Transnational Organised Crime, the Dandora dumpsite serves as an open market for illegal gun exchange.

“The garbage isn’t screened. Police cannot hazard a swoop down on the village because they don’t know what happens there,” read an excerpt of the report.

Another report carried out in 2018, revealed that an estimated 750,000 pistols and rifles are in private hands.

The Ministry of Interior is in the process of restructuring the country’s firearms licensing policy.

It is also believed that rogue police officers conspire with criminals to hire out their guns in exchange for proceeds of robberies.