Larry Madowo Moves back to Nairobi, Hits the ground running 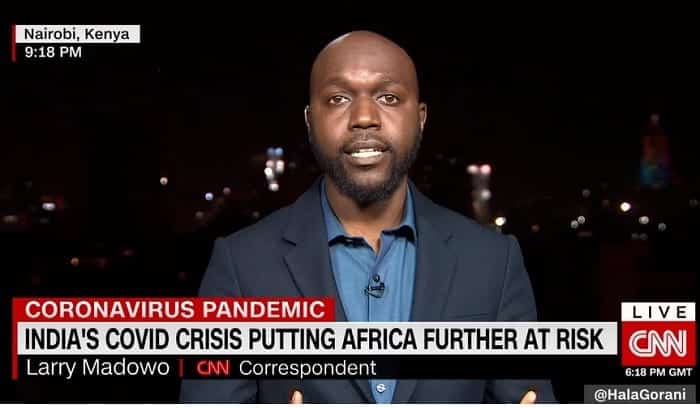 Larry Madowo hit the ground running after joining CNN as its Nairobi-based correspondent. Madowo’s maiden live link was on Monday May 17, 2021 just a day after he relocated from the United States.

“Changed channels and changed continents in a weekend. Fast work, Larry, fast work!” one of his fans – Jordan Dias – observed to which the journalist replied “Gotta keep it moving”.

Larry’s in-tray was full with his schedule running from 6:00pm to 11:00pm when he closed his live broadcast with CNN’s business guru Richard Quest.

“I’m burning the midnight oil on my first day at CNN,” Madowo tweeted.

His first task was to report on the status of the Covid-19 vaccination program with Zain Asher, where he noted that Kenya was on the verge of a crisis following a shortage of the jab.

“Countries like Kenya that rely on Covax, the vaccine sharing alliance, are not getting anything and there are about 140 million vaccines that were promised but not received to countries like Kenya,” he said, adding that his grandmother (96) had not been vaccinated.

Next he jumped on Hala Gorani’s first show where she was hosting from the main studio for the first time since March 2020.

Larry will have to get accustomed to working at night due to the time differences as his last appearance for the night on Quest Means Business ended past 11:00pm while it was only 4:10pm in the US.

“Induction is for babies in the industry. Professionals report on day one and send their report in the evening with achievements of the day. It’s like continuing from where you stopped,” Rhonda Becks encouraged the journalist.

“In your first day in Kenya, your angle is totally different from all the other journalists we have whose only duty is to follow politicians around to air their reactions on BBI. When I write my book you will have enough mentions, my absentee mentor,” Haron Ototo a communications specialist, commented.

Madowo’s move to CNN was announced on May 13 by Deborah Rayner, who is the Senior Vice President of International Newsgathering and Managing Editor, Europe, Middle East and Africa, for CNN International.

“I’ve enjoyed reporting from the U.S. and around the world, but it’s a real privilege to return to covering Africa at such a critical time in Kenya and around the continent.

“I have long admired CNN International’s award-winning coverage, and I’m honored to be joining such a talented team. I look forward to sharing the full spectrum of life in one of the most dynamic parts of the world with CNN’s global audiences,” the journalist said.

Larry Madowo Moves back to Nairobi, Hits the ground running