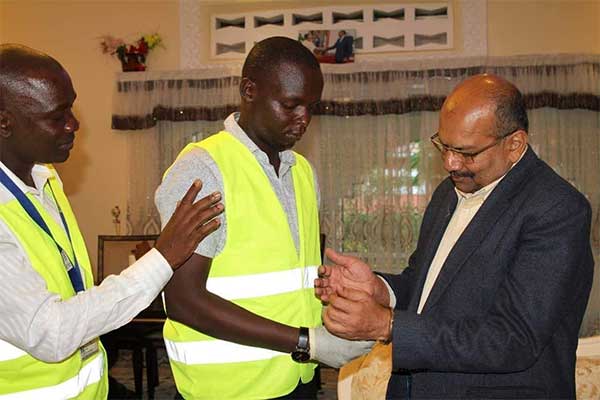 Detectives from the Ethics and Anti-Corruption Commission (EACC) are holding a Nairobi-based businessman who was arrested for allegedly attempting to bribe Governor Mike Sonko.

The businessman identified as Praful Kumar, was seeking for the approval of Grand Monar Hotel in Gigiri, Nairobi, which is under construction.

The Nairobi County government had on August 16, 2018 stopped the building of the hotel.

Sources said Mr Sonko was in hotel in Kanamai.

Speaking to Nation by phone, Mr Ojowi said the businessman was waylaid by EACC officers before they pounced on him.

“He had brought bundle of cash with him and we have counted the money and confirmed it is Sh1 million. We are now interrogating him and we will book him at the nearest police station as we continue with the due process,” said Mr Ojowi who was leading the EACC team.

Mr Sonko, through his communications director, Elkana Jacob, said he will not relent in the war on graft.

“The man has been trying to bribe me since January 21, 2018. We should support President Uhuru Kenyatta in this fight. Fighting corruption is like fighting terrorism. This war is real,” said Mr Sonko.

Sad Video of Driver Running Over a Woman in Nairobi

Joshua Kulei Response to US Ambassador on Travel ban