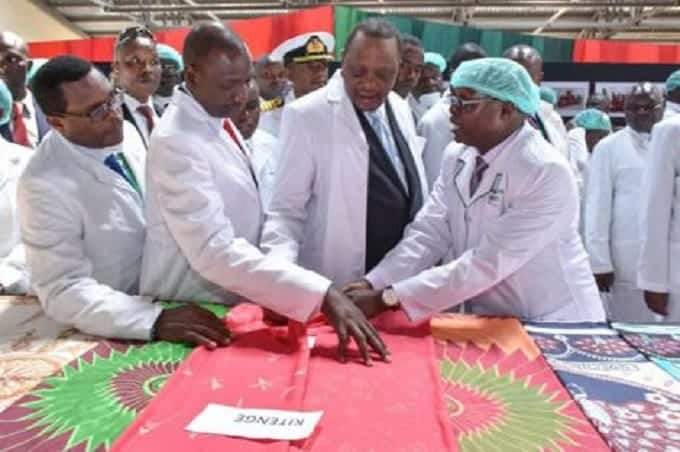 There are projects through out Kenya that have been run down over the years due to mismanagement of funds and inadequate financial muscle.

Some of these projects have roared back to life after President Uhuru Kenyatta allocated funds to their revamping in line with the big four agenda.

Below are some of the sectors that the president has revived since his coming into power in 2013.

The Kenya Meat Commission roared back to life on Monday, May 24, after President Uhuru Kenyatta launched it following its renovation by the Kenya Defense Forces (KDF).

KMC had being marred with numerous corruption cases including the Ksh6 billion scandal in 2019 and was almost at its death-bed.

To avert its collapse, the president ordered Agriculture CS Peter Munya to oversee its transfer to the military in September 2019 and the renovation was allocated Ksh80 million in the budget.

The facility has seen a repaint of the walls, new weighing scales, an instalment of glass panels and spacious rooms that can fit up to 30 heads of cattle.

In 2019, President Uhuru Kenyatta presided over the reopening of Rivertex in Uasin Gishu County, two decades after its collapse.

Rivatex collapsed in the 1990s after it struggled to get buyers following programmes that compelled African countries to free their markets to international competition.

This resulted to cheaper imports in the Country including second-hand clothes. With this, the textile companies struggled to find buyers for their products.

During the launch, the president called upon every Kenya to consume locally produced goods to support Kenyan entrepreneurs.

Additionally, he set aside Friday as a day when government officials would wear the African attires.

The Head of State has led by example, occasionally donning the made in Kenya clothes

The refurbishment of the Kisumu port was completed in early 2020 with the government spending a total of Ksh3 billion but is yet to be officially launched.

The Kisumu port is one of the projects that the president hopes to give priority when he visits the County during the Madaraka Day celebrations.

“We are going back to full maritime transport in the Lake both for commercial goods and passengers. We are also building the 26 km promenade where foreign and local tourists could take leisure walks or ride along the lake,” Kisumu governor Anyang’ Nyong’o stated.

The operations of MV Uhuru and MV Umoja ferries at the Kisumu port collapsed in 2006.

When ordering the refurbishment of the Kisumu port, the president directed the facelift of MV Uhuru ferry.

The ferry was built in 1995 and has helped to ferry goods to three neighbouring Countries through Lake Victoria for many years.

In just one trip, the vessel makes an estimate of Ksh2 million and can make up to Ksh17 million per month.

The Naivasha- Kisumu train has been dilapidated for years and is undergoing refurbishment.

So far, a majority of the track has been redone having increased capacity with 21 lines which have a capacity to hold 600 wagons.

The project will be instrumental in the transportation of goods and passengers to Kisumu and the neighbouring Uganda and Tanzania through Lake Victoria.

President Uhuru Kenyatta and ODM leader Raila Odinga will take a trip using the railway line in May 2021. Later, the Head of State will officially launch the revamped line.

Some of the airstrips the government has earmarked for rehabilitation include; Nyaribori Airstrip (Nyeri), Kakamega Airstrip (Kakamega) and Migori Airstrip (Migori).

The Kakamega will include an extension of the existing runway from 1.3 kilometres to 2 kilometres, reconstruction of aircraft parking, patrol roads and perimeter fencing to ensure the security of passengers

The Migori airstrip, on its part,  will enhance transport connectivity, boost trade in the region and decongest Kisumu International Airport (KIA).

Since 2013, more than 3.5 million homes have been connected to the national grid through the Last Mile Programme. This is a huge milestone, and one of Kenyatta’s unsung feats, considering that only 4.5 million households had been connected after 78 years of colonial rule and under 50 years of the independence administrations between 1963 and 2013. Kenyatta has also connected 99% of all schools to electricity.

The provision of free maternal healthcare was implemented in all public hospitals immediately the incumbent assumed office in 2013 and has helped mothers countrywide deliver free of charge ever since. This has reduced the maternal and perinatal mortality rate.

Since 2013, more than 3.5 million homes have been connected to the national grid through the Last Mile Programme. This is a huge milestone, and one of Kenyatta’s unsung feats, considering that only 4.5 million households had been connected after 78 years of colonial rule and under 50 years of the independence administrations between 1963 and 2013. Kenyatta has also connected 99% of all schools to electricity.

Infrastructure is critical in accelerating national development. Tarmacking of roads, thus, opening up remote areas for business, is one area Uhuru’s administration has been exceptional. In the seven years he has been in power, more than 7,000km of roads have been tarmacked at an average of 1,000km every year.

This is 44 times more than what the colonial administration built, and more than four times what the first three presidents collectively built per year. Among the top roads constructed under Kenyatta is Outering Road in Nairobi, Ngong Road, the Isiolo-Moyale Road, the Dongo Kundu Bypass in Mombasa county as well as the Voi-Mwatate-Taveta Road in Taita Taveta county.

Video: Daniel Churchill Ndambuki asked to Step Aside too