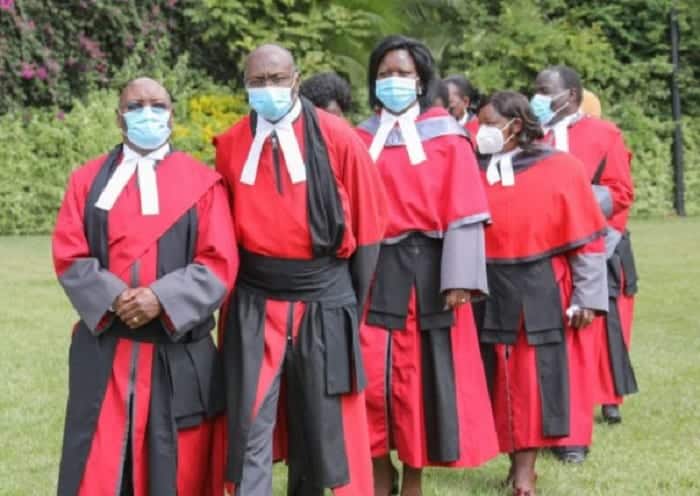 34 Kenyan judges appointed by President Uhuru Kenyatta yesterday to the Court of Appeal, Land and Labour Relations Courts have been sworn in.

The president presided over the oath-taking ceremony at State House, Nairobi on Friday, June 4.

In his congratulatory message, Uhuru urged the new appointees to discharge their duties with diligence. “I ask you to serve the people of Kenya with unfailing integrity and commitment, with utmost fidelity to the oath that you have subscribed to,” he said.

Uhuru appointed seven judges to the Court of Appeal and others to the Employment and Labour Relations Court, and the Environment and Land Court.

Six judges also nominated by the Judicial Service Commission (JSC) did not make the cut.

A statement from State House stated that the President turned down the nominations of High Court Justices Joel Ngugi, George Odunga, Aggrey Muchelule and Weldon Korir to the Appellate court “for failing to meet the required threshold”.

Registrar of the High Court Judith Omange and Chief Magistrate Evans Makori who had been nominated to the Environment and Lands Court were also left out.

The president’s refusal to appoint the six nominees has since caused an uproar in the legal divide.

On Friday, the Kenya Magistrates and Judges Association (KMJA) faulted Uhuru for cherry-picking appointees from the list forwarded to him by the JSC.

“Once the JSC has recommended names for appointment, the President has no power to tinker with the names. Any such attempt amounts to interference with the institutional independence of the JSC, violation of the Constitution and in particular, the rule of law,” Kuto said in a statement.