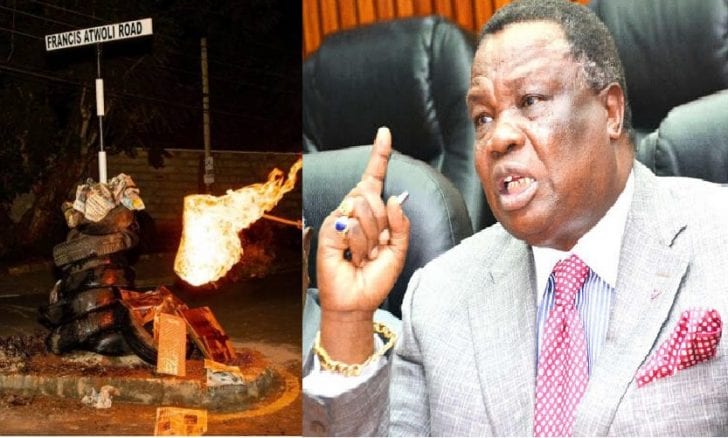 COTU Secretary-General Francis Atwoli says he is not hurt by the actions of those who burned down his honorary road sign located in Kileleshwa, Nairobi.

On Tuesday morning, June 15, photos of the vandalised road sign up in flames surfaced on social media just days after it was erected again.

From the photos, a vandal is seen lighting up a piece of cloth before throwing it onto the tyres, which seemingly had gasoline and burning up the sign.

In a statement, Atwoli condemned the act and pointed out that road sign was an act of honour by Nairobians for his years of service.

“My name is all over the world and one doesn’t require a street signage for them to know who Francis Atwoli is. The name will live in posterity taking into account my years of selfless service to the workers in Kenya and the world,” said Atwoli.

In May 2021, when vandals first pulled down the post, the COTU Sec-Gen stated that a CCTV camera would be installed to catch the culprits, a move that irked several Kenyans on social media.

The incident also comes a day after Atwoli was re-elected as a member of the International Labour Organization (ILO) governing body in Geneva, Switzerland, for the fourth time.

Sad Story of a Kenyan Diaspora student in removal proceedings