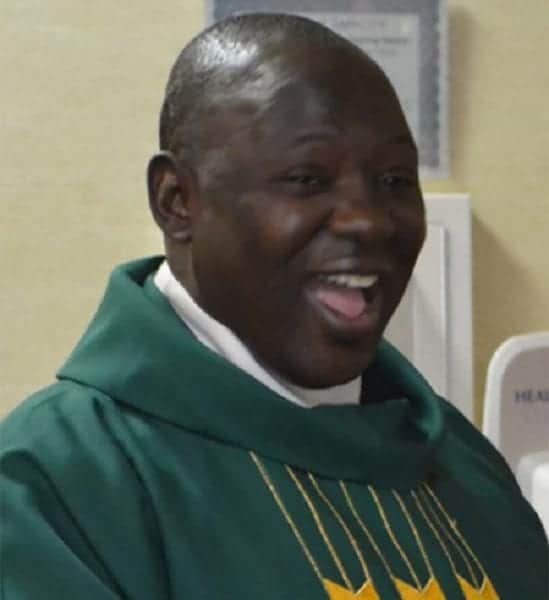 A Kenyan priest who served at Immaculate Heart Parish in Portland and St. Mary Parish in Albany from 2015 to 2020 died of COVID-19 May 20, a year after he had returned to serve in his country temporarily.

Father Leonard Omollo of the Apostolic Life Community of Priests was 49 when he died in a hospital in Kisii in southwestern Kenya.

A memorial Mass for Father Omollo is set for Saturday, June 5, 10:30 a.m. at St. Mary Church in Albany. A time to reminisce is set for afterward at the parish coffee shop.

He was born in 1972 in Kisumu, Kenya and was ordained a priest for the Apostolic Life Community of Priests in 2007. He served in Kenya and Tanzania before accepting a missionary assignment to the United States.

The younger brother of Father Omollo sent a note of thanks to Albany parishioners.

“We are humbled by your words of encouragement, messages of condolences, phone calls, and visits,” the family wrote.

Father Omollo was admitted to the hospital May 6 and discharged May 13. But he was readmitted May 14 after he developed labored breathing.

There were requiem Masses in Kenya May 26-27 and a burial May 28 with the local archbishop presiding. He was buried in the Apostolic Life Community of Priests cemetery.

“We were truly blessed to have Father Leonard with us at St. Mary’s OLPH,” Kevin Deynette said on Facebook. “Such a loss.”

Terry Brillon called the priest “one of the kindest men I have ever known.”

Kidero: Sonko is a Grown-Up Baby who loves Media Limelight

Kenyan Native Sentenced For Unlawful Possession Of Gun In Iowa

Chinese and Kenyan wedding everyone is talking about

STAY CURRENT:STAY IN THE PRESENT WITH GOD