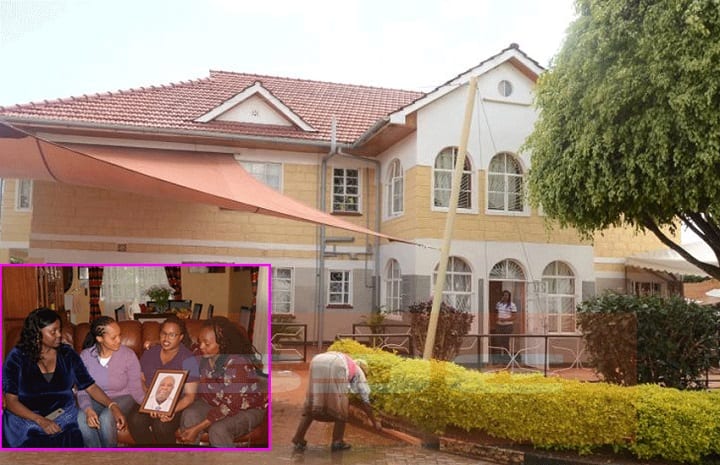 John Kinuthia Makumi alias Mr Money, who died on December 5 2018 at age 89, was a self-made billionaire who lived the America’s version of the ‘Kenyan Dream’.

At the age of 16, Makumi quit school and plunged into business full-time, selling chicken, much to the amusement of his schoolmates.

Born in 1930 in Kabete, in the then Kiambu District, Makumi’s family said he made his fortune out of sheer hard work and dedication, joining the billionaires’ club despite his humble background and limited education.

Nothing speaks more of the entrepreneurship fire that burned in him than the iconic Lavington Mall, in Nairobi’s leafy suburb, that he owned.

But what set him apart from many rich polygamous families not immune to wrangles is how he managed to live with his two wives while keeping a close knit family.

“As a good gesture of our relation, we have been staying together in one home  for six months with my co-wife, with the children, and later shift to her home for the same period. That is how we strengthened the bond in our family,” said Agnes Waringa, one of the widows.

By the time he died, he had accumulated property worth billions of shillings in his native Kiambu and Nairobi. His other properties included a 200-acre farm in Loitoktok, Zadar Building in Wangige, a building hosting Fountain Church near the Fig Tree in Nairobi’s Ngara and the upcoming Wangige Mall.

When Kiambu became too small for him, the entrepreneur decided to invest in Nairobi and beyond, spreading his wings eventually into the East African Community.

The businessman controlled his enviable empire from an office in Lavington, but would always retire to his palatial home in Rioki, Kiambu.

Despite his billions, the tycoon, according to his children, remained humble and always preferred to drive himself than fly while inspecting his vast business empire.

Yesterday, his children recounted how the self-made billionaire drove to Mombasa and Tanzania while minding his business.

“He was always ready to hit the road despite the long distances but never admired flying, perhaps that’s why he never owned a chopper while he could comfortably afford one,” recalled Wanjuhi Kinuthia.

The tycoon who succumbed to cardiac arrest, is survived by two widows – Waringa and Irene Nyakio – children and grandchildren.

He was known to be paranoid, with neighbours speaking of many roads to his home. His neighbours painted a picture of a secretive man who never allowed strangers into his inner circle. When The Standard visited his home in the outskirts of Kiambu town, it was under tight security as two hawk-eyed armed policemen manned the gate.

Despite dropping out of school at an early age, Makumi gave his children the best education including studying in universities overseas.

One of his daughters, Wanjiku Kinuthia, unsuccessfully vied for the Kabete Constituency seat in 2017 General Election.

“In everything that dad did, he strove to create a legacy through his work, his community and love for his country, family and friends,” she told The Standard

Gathoni Kinuthia, another daughter, said while growing, Kinuthia’s sons and daughters were treated alike and given the same chores.

Gavin Bells, owner of Kengeles Restaurant, eulogised Makumi as a humble hardworking man who taught him lessons that his father never did.

“Makumi approached life from an angle of simplicity and wisdom which made him progress both in business and family,” said Mr Bells.

Makumi will be buried tomorrow (Friday) at his Rioki village home.