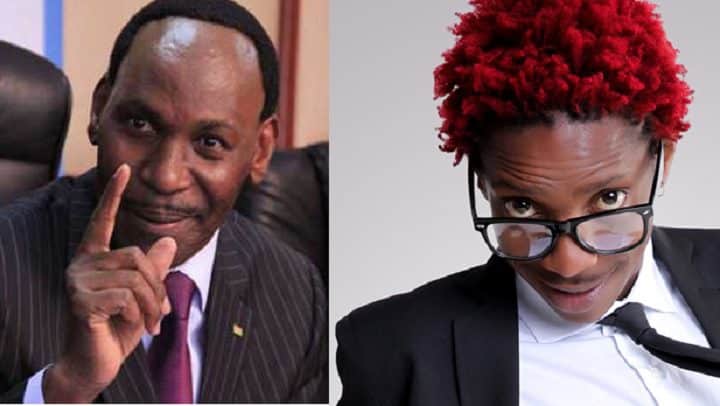 Comedian and self-styled president of comedy in Africa Eric Omondi has reacted to reports that Kenya Film and Classification Board CEO Ezekiel Mutua was removed from office.

The news was first reported by Makueni Senator Mutula Kilonzo Jnr and Omondi celebrated Mutua’s removal with a post on his Instagram page.

Referring to the beef between the two, the comedian said that whatever had befallen the KFCB CEO was a result of being disrespectful to artists.

“I said before September!!! and you thought it was a joke. you cannot bite the hand that feeds you. We are your employers. I told you your only option was to apologise to the entertainment industry for your unfortunate remarks but I guess it’s too late.

“I don’t know how true or false the word going around is, but I still promise you, unless you apologise and change your ways…hautakua kwa hiyo ofisi by September,” Eric’s post read.

The comedian’s opinions were shared by many Kenyans who celebrated Mutua’s alleged removal.

In response to the news, the KFCB CEO dismissed the reports as misleading information, maintaining that he was still the substantial holder of the office.

“My attention has been drawn to reports on social media to the effect that I have been fired as CEO of KFCB. Please ignore such malicious rumours. I am not aware of such developments and there can be no grain of truth in them as there’s no vacancy in the office of the CEO KFCB,” read Mutua’s post.

Pulse Live tried to reach out to multiple sources close to the CS but they declined to discuss the matter.

On Twitter, CS Mucheru posted photos of him aboard a plane and captioned “God’s creation is just breathtaking. Good morning. Mungu Mbele!”

Many Kenyans flocked on his Twitter, urging the Cabinet Secretary to clarify on the status of Ezekiel Mutua’s position.