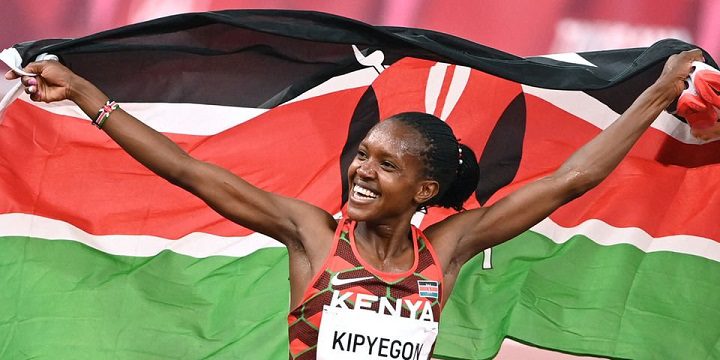 “I am so happy. It was something I didn’t really expect and I made it,” said Kipyegon.

“It was a really fast race, I knew it will be going until the last lap.

“To get the Olympic record is just amazing to me. I am so happy. I knew it would be a tough race being there with Sifan and Laura.

“Sifan is strong now and in good shape. I wanted to follow her and see what happened.”

Museveni Rewards Olympic Medalists with cars and houses for…

Kipyegon won her first Olympics gold in 2016 in Rio.

Kipyegon broke the 33-year-old Olympic record set by Romanian Paula Ivan at the Seoul Games as she clocked 3min 53.11sec in hot, humid conditions at the Olympic Stadium.

Muir produced a national record of 3:54.50 with a strong finish to claim silver, with Hassan taking bronze in 3:55.86.

Hassan said she was “very happy” with her bronze-medal showing.

“I did my best and made it a fast race. I could not have done anything else. I have already run so many kilometres, so I am super happy.”

It meant that Hassan, formerly coached by the disgraced Alberto Salazar, has barely been off the track since her arrival in the Japanese capital.

She arguably produced one of the most memorable moments in these Games when she recovered from a fall in the 1500m heats in the morning session to get up and qualify before returning 12 hours later to win the 5,000m.

Sporting a black headband over black hair tied back in two tight plaits, world champion Hassan had it all to do in the 1500m against the formidable Kipyegon, who was pushed into silver at the 2019 Doha worlds.

Canada’s Gabriela Debues-Stafford took up the running before Hassan moved slickly to the front with three laps to run.

Kipyegon stayed perched right on Hassan’s outside shoulder, the pair’s stride matching as they split the field.

Muir tucked in between the two leaders at the bell, Kipyegon making her move with 200 metres to go.

The Kenyan, 2017 world champion with a second silver from Beijing in 2015, produced a devastating turn of pace to glide past Hassan and into total control as they headed into the home stretch.

As Kipyegon accelerated past Hassan, Muir followed on her coattails to hold on for silver.