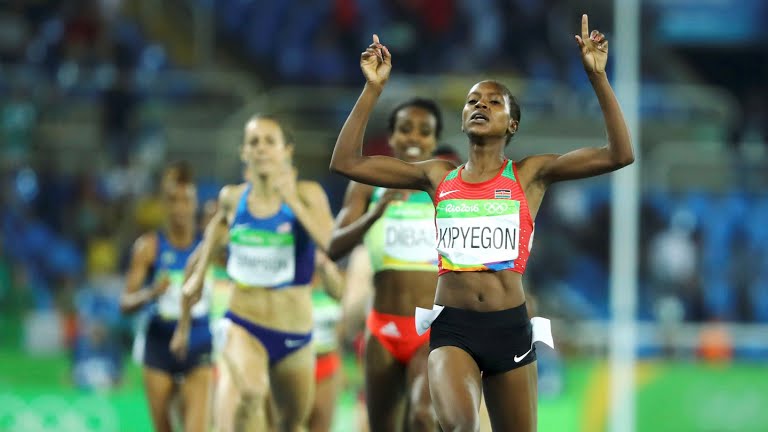 Faith Kipyegon shocked the world. The Kenyan defeated world record holder Genzebe Dibaba of Ethiopia in the women’s 1,500 meters final at the 2016 Olympics with an amazing final 200 meters to win in a shocking 4:08.92.

Dibaba finished second in 4:10.27 and Jenny Simpson of the U.S. won the first-ever medal for Team USA in the 1,500 meters by finishing third in 4:10.53. American Shannon Rowbury, who holds the American record, was just behind Simpson in fourth place.

The pace dawdled through the first 750 meters as the runners came through at a 76 seconds per lap pace, but then Dibaba roared to the front. Laura Muir of Great Britain stuck on her heel and Kipyegon was in her wake. Kipyegon stuck on her and shockingly passed her with 200 meters to go.

Dibaba stunned with a 3:50.07 world record run in 2015 and has been the world’s dominant middle distance runner since. She raced to an easy win in last year’s world championships but was unable to win in Rio.

Not all is well in Dibaba’s camp. Her coach, Jama Aden, is involved in a doping controversy. He was arrested and allegedly found with the performance enhancing drug EPO in a hotel in Spain this summer.

Dibaba wasn’t able to run away with this one, however, and now Kipyegon is golden.