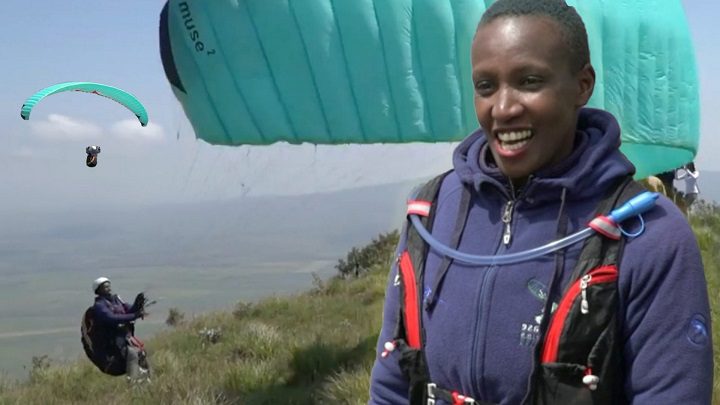 Nyambura Kariuki is Kenya’s first native paraglider, setting the pace for the inclusion of women into the airborne sports which is growing in the country.

Speaking in a recent interview on BBC, Nyambura said that paragliding helps give her a bird eyeview of the earth and different aspects of her life.

The mother of four disclosed that when not taking care of her young children, she like to write books and tell stories about her culture.

In June 2021, she became the cross country champion at the Kijabe Hills Paragliding Festival.

“People think paragliding is madness but its not. It is the safest sport because I need to b in my right state of mind, I can’t just take off.

“It takes discipline, it takes patience and caution because one slight mistake can cost you so you need to be very careful,” she said.

Nyambura added that paragliding take her mind away from the hustle and bustle of being a wife and a mum.

“I have set a precedence for the women in Kenya and East Africa and I have set the bar so high even for my children for whatever they want to do, it doesn’t have to be paragliding. If your mother can paraglide then what can’t you do?” she noted.

For one to become go for one of those adventurous trips in the air, one had to be assisted by a tandem pilot before being let to go on their own.

If the conditions are right and the passenger is willing, the pilot may turn the controls over to the passenger and let them experience what it is like to fly a freeflight craft.

Some of the best locations to go paragliding in Kenya include Kijabe, Mt. Ololokwe and Ndoto Mountains.

‘People think paragliding is madness, it’s not’
🇰🇪 ‘Kenya 1’ aka Nyambura Kariuki is the first Kenyan woman to take to the skies as a paraglider. Now that she’s spread her wings she shares her thoughts on making history in an extreme sport and what flying feels like.#paragliding pic.twitter.com/wsgQ57cAN3

The most popular, however, is in the Kerio Valley where you can soar into the skies and get wonderful views of the Rift Valley and Mt Longonot.

Although the sport is favourite of many foreigners, some Kenyans are slowly taking it up.

Kenya is competing with South Africa in attracting tourists who are willing to try extreme sports such paragliding, skydiving, bungee jumping and ziplining.

KENYAN MAN HAS PASSED AWAY IN BIRMINGHAM, UK