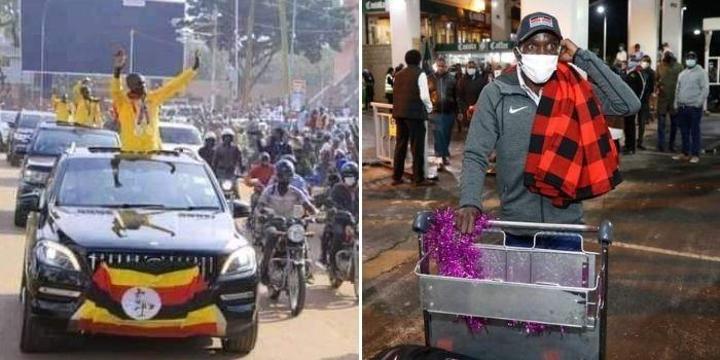 There was an uproar on social media on Wednesday, August 11, after a section of Kenyans protested  poor reception of athletes who represented the country in the just concluded 2020 Tokyo Olympics by the Ministry of Sports.

This was after the Ministry failed to accord the athletes a befitting welcome despite registering an impressive performance in the Olympics.

The uproar came just a day after Olympic Marathoner and World Record Holder, Eliud Kipchoge, jetted into the country only to be received by family members  and friends at the Jomo Kenyatta International Airport (JKIA). Kipchoge successfully defended his Olympic gold medal.

On Wednesday, Kenyans woke up to a trending hashtag on Twitter thanking Sports CS Amina Mohammed.

The hashtag was not taken lightly by netizens who drew comparison between Kenya and Uganda’s reception of their athletes from Tokyo.

“Despite the Kenyan flag being flagged high and being the number one in Africa, the Government cannot even honour the participants,” stated a netizen by the name Okumu.

“#AsanteCSAmina this hashtag is just a mockery of our athletes.” Who should we be thanking?” Nehemia questioned.

Kenya was position 19 worldwide and top in Africa on the leaderboard.

Meanwhile, in Uganda, business was at a standstill as the athletes and team officials disembarked from the plane at Entebbe International Airport.

Government officials, family members, officials from various sports associations and federations all waited to receive their heroes and heroines.

Soon after their arrival, the Ugandan athletes were driven around the city in celebrations.

The athletes will be hosted to a luncheon on Wednesday, August 11, by President Yoweri Kaguta Museveni.

Uganda’s two gold medals, a silver and one bronze marked the country’s best performance in the Olympics since its first participation in 1956.