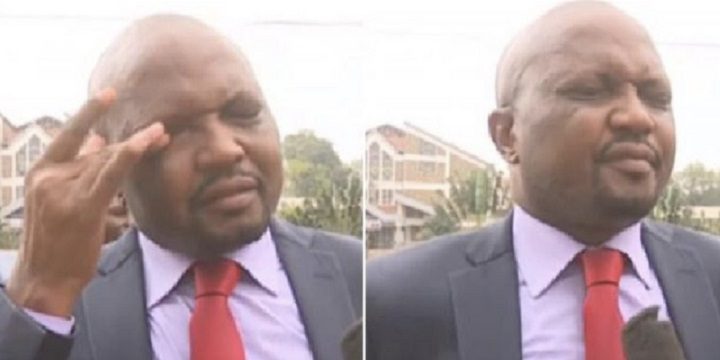 Gatundu South MP Moses Kuria was engaged in running battles with the police in Meru County, where he had gone to support Chama Cha Kaziby-elections.

Kuria’s party had organised a march to IEBC offices as Milton Mwenda submitted his documentation for clearance.

The supporters had arrived in hundreds aboard lorries and boda bodas but were dispersed by police officers.

Kuria is set to clash with supporters of the United Democratic Alliance linked to Deputy President William Ruto which has unveiled its own candidate.

The Gatundu South MP is looking to replicate his wins in Juja and Kiambaa by-elections which he credited himself for delivering victory to the hustler nation.

“I went ahead to win in Juja and after that, all these people, Mathira MP Rigathi Gachagua and co. neither helped nor contributed in any way.

“They were there praising my victory as one for the hustler nation, I don’t know when this changed and when I became a criminal or an outcast for Gachagua to go all over blasting me because I have a party,” Kuria said.

He has maintained that while he supports DP Ruto’s campaign, he will not join the UDA party.

In a recent interview, Kuria said that he will enter into a partnership with the deputy president on his own terms.