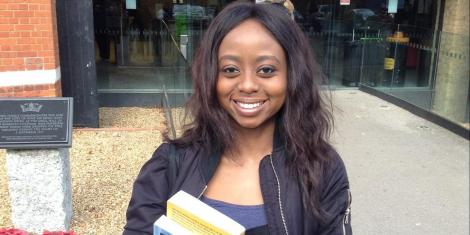 In a statement issued by BBC, as seen by Nairobileo.co.ke, BBC Africa TV programmes director Newton Ndebu announced that Anita was joining the team.

“I’m pleased to introduce Anita Nkonge as our new Youth Reporter based in Nairobi. Anita is a talented journalist with a keen interest in youth affairs. She recently joined the BBC from the Nation Media Group.

“We look forward to her creative contribution on our flagship youth programme ‘What’s New’ and in making youth-focused content across BBC platforms,” the statement reads in part.

“We wish her the very best as she embarks on this assignment,” Ndebu said.

Anita served the Kimathi Street-based media house for three years prior to her departure.

She noted that getting to work at NMG was a dream come true for her, even as she moves on to another challenge.

“There are not enough photos or words that can sum up what has, for me, been three transformational years at Nation Media Group, particularly NTV. Working for NTV has honestly been one of my many dreams come true,” she wrote.

“I came in as a young intern and though leaving a few years later, I have grown in leaps and bounds as a journalist. I am grateful for the lessons, the impactful stories I managed to do and the people I met in the midst of it all.”

She recognised her former colleagues for helping shape her into a better journalist.

Anita holds a Bachelor’s of Journalism degree from the University of Kent in UK. She began her career as an intern at Royal Media Service (RMS) where she served for three months.