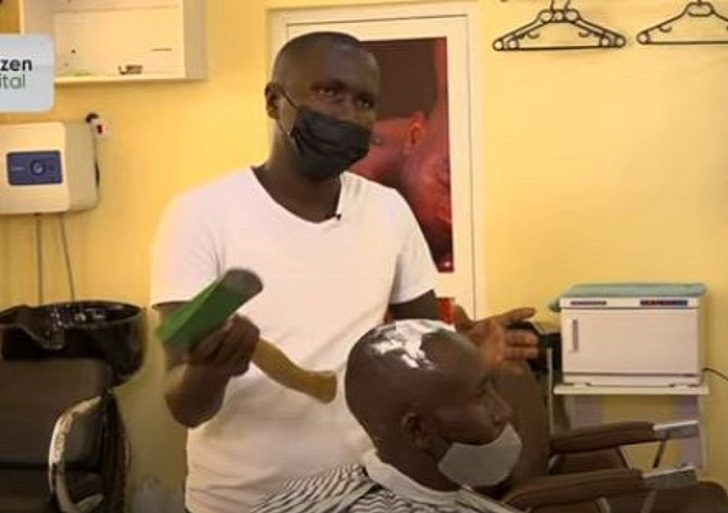 Axes are not just for cutting wood as a barber in Kenya seems to have no worries using them as tools for his business. Julius Mwangi, who owns a barbershop in Thindigua, Kiambu county, is making waves for his bizarre hair-cutting skills largely inspired by old stories about how rugged men used to shave their beards.

Mwangi has been a barber since 2014 but started using an axe to shave hair at his Clippers Kings barbershop three months ago. Like many other hairstylists, Mwangi wanted to come up with an idea to set his business apart from the competition. And so after seeing a man shave with an axe, he decided to pick up the wood-chopping tool and he has since not regretted it as he is attracting new clients who are curious about his skill.

In an interview with Inooro TV, Mwangi said most of his customers are reluctant to let him shave them with an axe instead of the electric shaving machine. Others are however comfortable with his unconventional haircutting tool. Mwangi uses the axe to among other things draw a hairline on a client’s head and also shave beards. He charges $5 for a shave.

The barber told Inooro TV in his native Kikuyu language that some people come to take photos when he is at work. “When people hear of a barber shaving with an axe, they are curious to know where. Some come to see and take photos with the axe but prefer not to be shaved with it. Some come full of fear, but I help them overcome it,” he said.

Mwangi maintains that an axe is ideal for shaving “Jordan”, where one completely shaves their hair. He said with the wood-chopping tool, he wouldn’t have to worry about power outages as he can still work whether there is power or not.

Now many are wondering if they would ever get their hair groomed in such a way. But interestingly, Mwangi is not the only hairdresser to use an unconventional hair cutting tool for his business. There have been stories in the past about hairstylists using hammers, hatchets, samurai swords, live flames and hot tongs to cut hair.

Russian hairdresser Daniil Istomin said in an interview in 2017 that he taught himself to cut hair with a sharp hatchet instead of scissors and has improved his hair-cutting skills. “The axe makes everything easier, because with one stroke you can cut as much hair as with ten scissors strokes,” Istomin told Russian news agency RIA Novosti.

In December 2016, it was reported that a barber in Morocco was giving haircuts with just an axe and hammer. A Turkish barber also made headlines in March 2012 following reports that he was using fire and an axe, rather than scissors and razor blades, to shave his customers in his shop in the northwestern province of Balıkesir. Selahattin Aytekin had been using the unusual tools of the trade for three decades when he was interviewed.

In March, a barber from Lahore, Pakistan went viral on social media for styling and cutting hair with tools such as broken glass, hammer and butcher’s knife.

Throwback:Never Seen Before PHOTO of Raila and Ida Odinga in their Youth