"Murdered student was in a relationship with my son"

Police capture man who hacked Moi University student to death: A university student who was hacked to death in Eldoret was romantically involved with a 29-year-old man suspected of killing her, a woman has claimed.

The woman, who claimed to be the suspect’s mother, told The Standard her son had on numerous occasions showed her photos of the victim, Ivy Wangechi.Ms Wangechi was slashed to death yesterday outside the Moi Teaching and Referral Hospital (MTRH), Eldoret, as she walked with her friends.“They had been in a relationship even before my son got a job and the woman joined school. He even wanted to marry her, but it seems they began having issues,” the woman said. 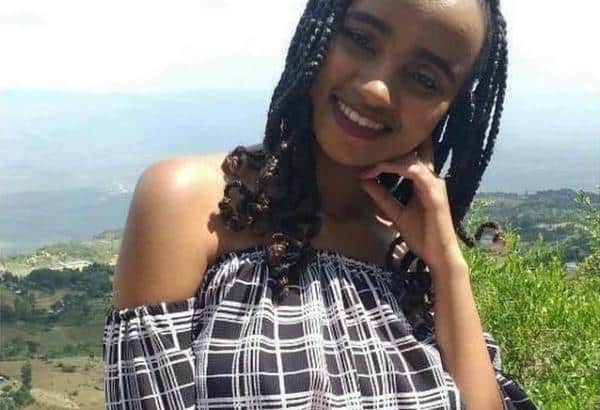 She added: “I have never met the lady, but he used to show me her photos on phone… but recently, he came to me saying they had parted ways, a move which I told him was in the right direction because of their relationship issues.”The woman said her son had never shown signs of being temperamental to the extent of killing someone and she was shocked by the incident.“It is so unusual of him because he cannot do such an act. What perturbs me is that he did not share with anyone about his trip to Eldoret, yet we were with him yesterday in Nairobi at 8pm and he had not closed shop at a business where he works,” she said.She suggested that the two might have tried to work out their differences before the incident.“He is my firstborn son and he has been working hard to earn a living. I am yet to come to terms with what he did. His father and uncle are on their way to Eldoret to piece up details of the incident,” she said yesterday.

The suspect’s brother, a patient at MTRH, confirmed there having been a relationship between the killer and Wangechi.“I have never met her, but my eldest brother used to speak about her saying she is in Eldoret. He had photos of them in his phone,” he claimed.The suspect is said to have hacked Wangechi with an axe and a knife. The student succumbed to her injuries in hospital.According to witnesses, Wangechi finished doing ward rounds at MTRH at about 10am and she left the facility in the company of her friends when the assailant accosted her from behind.The assailant cut her on the neck using a knife and when boda boda operators who were nearby tried to intervene, he fished out an axe from a white gunny bag.

“He was smartly dressed and the sight of the axe and knife he was holding scared most of us from approaching him,” said Stanley Mutai, a resident who arrived at the scene soon after the student was attacked.The suspect is said to have then hit Wangechi with the axe and run towards the school of dentistry. “The public followed him, pelting him with stones, until he fell. That is when police arrived at the scene and rescued the assailant before rushing him to MTRH because he had suffered injuries on the head,” said Mr Mutai.Students marched to Eldoret central police station.“It is a sad day for our colleagues because we have lost a final-year student who has persevered for seven years due to prolonged strike only for her life to be cut short under mysterious circumstances,” said Michael Maina, who was Wangechi’s class representative.“The incident has exposed loopholes in our security system and our safety. We hope that we shall not witness another occurrence in future,” he added.

The suspect is said to have travelled from Thika and yesterday parked his vehicle next to the institution’s main entrance. He went to Eldoret town using a boda boda, bought the knife and axe and concealed them in a gunny bag before heading back to MTRH.Police impounded the suspect’s car. The suspect’s brother confirmed that the car was his. The suspect worked for a betting company.Moi University Vice Chancellor Isaac Kosgey urged students to remain calm as police investigate. “We have lost one of us who was attacked by an unknown individual outside the referral. We have already contacted the family,” he said. “Learn to manage relationships,” Prof Kosgey told the students.