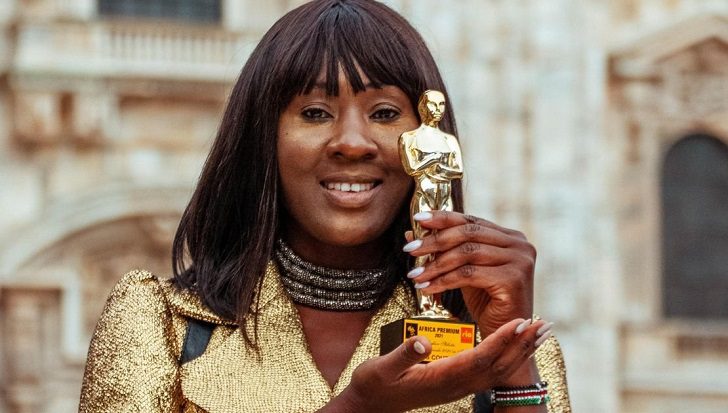 Kenyan Model Roselyne Ogonya was not happy that she kept losing modelling gigs in Italy, a new base to her then, due to her large “Kisumu” feet. So, she underwent an operation to reduce them.

She used to have a size 43 foot but after the surgery, which she says involved reduction of the longest toe, she fits comfortably in size 41½ shoes.

“I had very big feet and the designers who liked me always sent me to the runway without shoes,” she tells Nation.Africa in a video call from Milan, Italy.

But other designers could drop her altogether upon realising that she could not fit in the shoes they made.

“I used to cry those days; I was so depressed. This is how it works: You go for the casting where you’re like 10 or 20 or 30 models. Then they choose the ones they like. I was always chosen. Then you go to fit the dress. Then after fitting the dress, you go to the shoes. So, it used to happen that after I’d done all the fitting and my spirits were high, shoes couldn’t fit,” she says.

It was stressful for her because she says that before Covid-19, one catwalk gig used to pay 1,000 euros, which comes to 800 after the agent deducts their cut. Eight hundred euros is equivalent to Sh102,000 in today’s rates.

“So, you know you’ve just watched 800 euros going into the trash bin just like that. And it was not easy. So, I had to do an operation,” she says.

“My feet were cut and reduced. There is that tallest toe next to the big toe. Mine was a little bit longer. So, they had to cut it and they put some metal, like they squeezed it down,” she adds, illustrating with her palm.

“I never knew such things happen. But anyway, I have beautiful feet.”

The foot reduction conversation comes up as we discuss Roselyne’s journey from Kenya to Italy, an award she won in September and a clothing line she started that is making Italians fall in love with kitenge, the Maasai shuka and other East African apparel.

She left Kenya in July 2006 and Italy has been her home since – though she has kept a tradition of returning to Kenya at least once every year.

A year before she left, she was a subject of infamous headlines as she passed out on stage during a Miss Universe Kenya pageant at Safari Park.

Events manager Leakey Odera, who was the producer of the show, recounts that moment in an event where the then vice president Moody Awori was the chief guest. Mama Ngina Kenyatta was among the VIPs in attendance.

“During the final announcement of winners, just before they called Miss Universe 2005 Racheal Marete, one of the contestants fell on stage. The master of ceremonies was Big Ted. He had to stop the announcement and carry Roselyne to the back stage for first aid. The next day on KTN, she was the headline: the lady that collapsed during Miss Universe Kenya at Safari park,” says Leakey, who describes Roselyne as “tall, dark, humble and very friendly”.

To this day, Roselyne has no idea what happened to her.

“I don’t know why I fell. I was still young, I was anxious, and it was the first time I was seeing all these cameras in front of me: Nation, KTN, and all,” she says. “Then they were asking questions and we were many. And there was Sh1 million to be won; so I could not digest everything at once.”

It was an embarrassing moment but it delivered a life lesson: “You don’t give up when you’ve fallen once. You fall, but the important thing is that you rise up and go on.”

That incident happened just a year after Roselyne, an alumna of the Vera Beauty and Fashion College, had ventured into modelling in 2004 at the age of 24.

“I was in the modelling industry from 2004 until 2006 then I relocated to Italy for an international modelling career,” she says.

Her relocation to Italy happened through participation in a movie shoot in Malindi.

“There was an Italian production that was shooting some movies in Malindi. In that period, I was in Mombasa, so my agency called me. They knew I was in Mombasa. They asked if I could go to Malindi for this casting,” she recalls.

The company doing the filming had a modelling agency and due to her performance, she won herself an invitation to Rome.

“So, I made my way to Italy and immediately I was welcomed in this agency, the Glamour Modelling Agency,” she says.

But her initial days were not easy. First, she says, her African “endowment” worked to her disadvantage in some instances.

“I was so skinny but the ‘Adhiambo C’ was not going anywhere,” she jokes. “So, I had a lot of problems with that because some of the dresses could not fit.”

That happened along the issues with her feet, up to the point where she had an operation.

But she quickly shook off the initial challenges and established herself within the Rome-based Glamour Modelling Agency and Milan-based Elite agency. She took part in major fashion weeks, fashion TV shows and the Altaroma fashion events. She also modelled for labels like Fendi, Celine, Armani Jeans and fashion designer Alberta Ferretti.

In 2011, she joined the Koefia International Fashion Academy in Rome, coming out with skills to scale the fashion world which she says she will stick with for life.

“I can’t leave fashion,” says the 41-year-old. “Mine is actually not work; it’s like a hobby. When your work is your hobby, you’ll not work a day in your life.”

In 2015, she would step up her skills in the field by enrolling at fashion school Istituto Moda Burgo. She studied there till 2018.

“After graduation, I created my clothesline and brand, MOG Couture,” she says, adding that the “OG” refers to her “Ogonya” surname.

Through MOG Couture, she has created a number of clothing items and accessories that have been showcased on various runways. Some of her products were worn by models in an event held in September where Roselyne won an award.

The September 22 event was dubbed Afro Oscars Italia and given the magnificence of her clothing items, she was declared the Best African Original Fashion Designer.

“We were very proud. I didn’t even expect it to happen. I represented Kenya very well,” she says. “I showcased the full Maasai costumes: a European style of clothing but with the Maasai fabrics.”

Her creations, displayed on mogcouture.com, include garments that make a playful use of Maasai clothing patterns or with a dash of kitenge. There is also jewellery and other adornments.

So, how do Italians love the kitenge?

“They love it. But some people can’t truly take it; so maybe they can just have small portions of it; maybe in the pocket, or in the lining. But when selling in Europe, we have to tone down the colours,” she says.

The target market of MOG Couture at the moment, she says, is Europe. She might start producing clothing items for the Kenyan market by 2023.

Word of the Day:Consistency of Character

UHURU, RAILA BRACE FOR BATTLE AHEAD