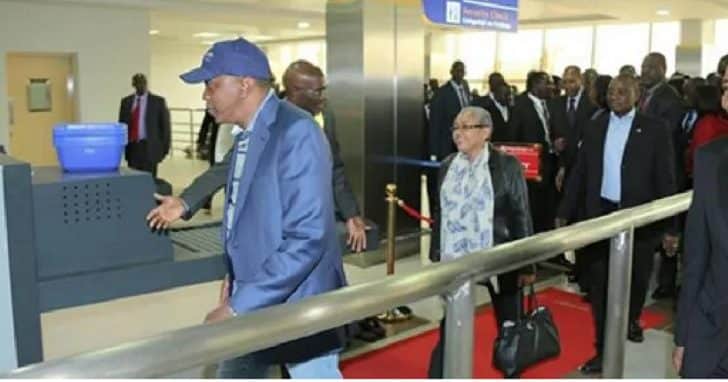 Operations at the international airport came to a standstill after the President jetted back into the country from the United States, where he had been for a week.

Flights in and out of the country were temporarily stopped, causing travellers to complain that they could not move around the airport due to security measures.

The Head of State was welcomed by traditional dancers and government officials which saw netizens lament owing to the delays the exercise caused at the airport.

Kenyans on social media expressed their disappointment over the delays and urged the President to do better. His convoy also caused a stir online, with Kenyans stating that they would have to sit in traffic longer as Uhuru made his way home.

Some pointed out that they could miss their flights due to the traffic and delays that were occasioned by the President’s return on Friday.

Uhuru was in the U.S on a state visit, during which he chaired a United Nations Security Council (UNSC) high-level open debate on diversity, state-building and peace.

President Joe Biden also hosted Kenyatta at the White House where the two leaders discussed the strong U.S – Kenya bilateral relationship, and the need to bring transparency and accountability to domestic and international financial systems.

Political pundits noted that Kenya is a major African player on the world geopolitical stage, as evidenced by Biden’s decision to meet with Kenyatta, which was also the former’s first in-person talks with an African leader since becoming president.

After the meeting, the White House issued a statement that read the duo “discussed their shared commitment to defending democracy and human rights, advancing regional peace and security, and accelerating economic prosperity through climate-smart solutions and the use of renewable energy resources.

“Underscored the need to bring additional transparency and accountability to domestic and international financial systems and to advance peaceful resolutions to the conflicts in Somalia and Ethiopia.”

Kenyan faces life in prison for transporting drugs in Philippines