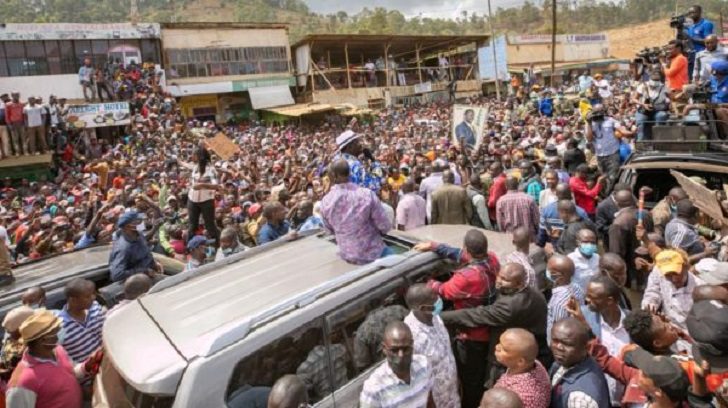 ODM Leader Raila Odinga had a difficult time addressing a gathering in Meru County on Tuesday, after a section of the crowd kept chanting Deputy President William Ruto’s name amid his address.

Accompanied by Meru Governor Kiraitu Murungi, Agriculture Cabinet Secretary Peter Munya among other leaders, Odinga made a stop at one of the local centers to address a gathering, only for a section of the crowd to chant Ruto! Ruto! every time the former Premier shared a point.

An attempt to calm down the group was futile, as they kept chanting the DP’s name. Odinga resorted to some of his common political slogans like Vijana Oye! Vijana Rya! Vijana Tibim!, but these were also unfruitful, as the crowd continuously chanted Ruto! Ruto!

While addressing issues around BBI, a section of the crowd kept chanting “Ishindwe”; a Swahili phrase that translates to “Let it be defeated”.

Today marks the second day of Odinga’s visit to Meru County. On Monday October 18, 29021, he received a warm welcome as he traversed the county selling his agenda for the region.

Key issues that dominated Odinga’s address in various parts of the county include; creation of more industries and securing miraa markets abroad.

“We want to change the way of doing things. We want to bring an economic revolution to the country. We need the strength of the youth to grow the economy.

“I am good friend of Congolese president Felix Tsishekedi. I will talk to him to allow us to export miraa there. I will also speak with Tanzania so we get markets for the produce,” he said.

Jakakimba: My family name is not famous but I can serve people of Homa Bay

Word of the Day:The beauty of forgiveness.