Residents of the Iten in the Rift Valley have their life upended after an athlete who rose from the village to find success in the United States returned with a life-changing gift.

In May, the doors of Simbolei Girls’ Preparatory Academy, a high school built by athlete Richard Kaitany and his wife Andrea, open its doors for the first time to accord the girls a chance at an education.

In an interview with Runner’s World, Kaitany noted that he was touched to give back to the community out of his own childhood experience.

Born at the edge of Iten, the athlete attended primary school and transitioned to St. Patrick’s High School where he was not so keen in pursuing athletics as a career.

His high school coach, however, encouraged him to take the career path since at the time, in 1974, most American Universities were increasingly offering scholarship to athletes.

Kaitany’s life changed when his then coach, Norm Thomson, a Peace Corps volunteer, sent his exam scores to Iowa State University and he secured a scholarship.

His community helped secure his air ticket to the US and while at the University, he achieved a number of successes in the marathon championship. He also landed a job with a seed company in Iowa State.

He later used the athletics scholarship to acquire a master’s degree as well as a PhD. He participated in the 1998 Chicago Marathon where he won Ksh1.1 million (USD10,000).

“That was the first money I used to pay for graduate school,” stated Kaitany

In 1984, he married Andrea and based on their upbringing, they decided that they would give back to the community.

According to the publication, the idea to set up the institution was first floated in 1998 after the locals complained about the lack of high schools for girls which impeded their growth academically. 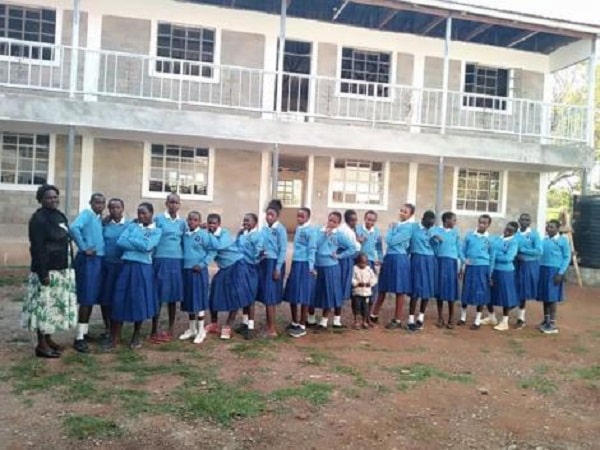 In 2006, the couple decided to refinance their house in Michigan in order to buy a parcel of land on which they would set up the school.

In the decades that followed, they would take part in construction activities aided by donations and contributions from other parties.

“We got private donations from friends and family that amounted to about 20 percent. The rest was just whatever we could afford. We definitely did without a lot of things. And it took from 2006 to 2020 to have anything to show,” tated Andrea.

The first cohort in the school are 19 students, all of whom are on scholarship. Some are financed by external organisations such as Belgian-based health and fitness giant Golazo.

Andrea is a native Iowan who was studying English when she met Kaitany. The couple is blessed with four children.