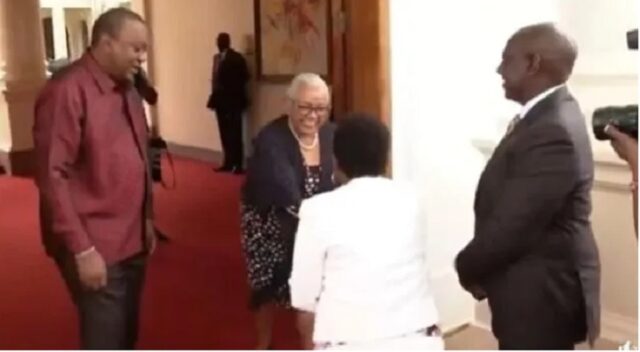 President-elect William Ruto is at State House Nairobi, where he is holding talks with his predecessor President Uhuru Kenyatta. Ruto arrived at State House in a Lexus LX a few minutes after 4pm and was welcomed by Uhuru, with a firm handshake.

The President-elect was accompanied to the event by his wife Rachel Ruto who met their hosts, Uhuru and his wife Margaret Kenyatta. They were escorted by state security. This is the first meeting since Kenyans went to the polls.

The two leaders are, thereafter, expected to address the nation from State House after holding a conversation.

Speaking to the press, Interior Principal Secretary Karanja Kibicho noted that the event was scheduled to kick off at around 11:00 a.m.

On Monday, there was a mock event at Kasarani stadium where a number of musicians were invited to perform.

Approximately 20 heads of state already confirmed their attendance including Uganda’s Yoweri Museveni who enjoys a close relationship with Ruto.

US President Joe Bidden, on Saturday, flagged off a delegation of five to attend the event among them US Ambassador to Kenya Meg Whitman.

The event comes a day before the President-elect is slated to be officially sworn-in as the fifth President of the Republic of Kenya at Kasarani Stadium.

US Sets New Record With Ksh23 Billion Donation to Kenya…