The story of Abubakar Abbass: “God can lift you among millions and make you great,” murmured Mrs Warda Abbass while praying after seeing her son Abubakar Abbass trending on social media.

Abubakar 23, traveled to Qatar two months ago after he was recruited by Mombasa woman representative Ms Zamzam Mohammed to work as a casual in the World Cup tournament.

This was his fifth attempt in search of greener pastures in the Middle East. All of his previous endeavors to travel to Saudi Arabia were thwarted by his parents due to the increasing number of Kenyan subjected to torture and suffering in the country.

However, his parents finally gave in to his demands after they were assured by the recruiting agency of his safety. The Sh75,000 salary was also alluring.

The parents said it was a golden chance since they were not charged anything, everything was catered for by Ms Mohammed.

“He heard about the recruitment from the mosque when Mombasa Deputy Speaker Fadhili Makarani was informing the youths from Changamwe. We let him travel because Qatar is different from Saudi Arabia. Furthermore, he would be okay because he was recruited alongside 3, 600 others who were recruited by Ms Mohammed’s firm in the Coast region,” said the mother. 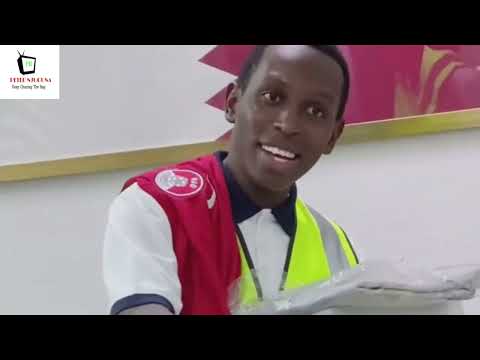 When he left, his parents begged him to continue being the disciplined, prayerful, and dutiful son he has always been and true to their words it was evident when he trended globally on social media for his good work.

The parents said it never came as a surprise since their last born was always a star throughout his life.

The former Soweto FC team striker is nicknamed ‘Aguero’ due to his prowess in football like Sergio Aguero, the Argentina football star.

A few days ago, Abubakar called his parents asking them whether they had seen his trending videos.

In the streets whenever his parents pass by children shout: ‘metro, metro, metro this way’. Ms Abbass was wondering why she had become a sensation in Wayani, Changamwe.

“That’s when he sent me the videos and I couldn’t be so proud of my son. People nowadays call me Mama Metro. Abubakar used to wash clothes, and sweep the house before going to his football matches. He is a good boy who loves and respects his parents,” she said.

Abubakar chats with his parents twice a day informing them about his daily experiences at the World Cup. He also talks about the harsh weather conditions.

“But I always tell him to drink a lot of water to stay hydrated. He told me a pampered child cannot do his work, it takes a lot of courage and perseverance. I always pray for him,” she added.

Abubakar, who schooled at Ngome Primary School and Changamwe Secondary School where he got a C plain in KCSE, wanted to study engineering but could not due to lack of school fees.

Instead, his parents enrolled him in a driving school as he perfected his football skills at Soweto FC.

“He is destined for greatness. I told him that God, discipline, and respect can make you dine with Kings look at him now! The day he went global I could not eat for a day because of excitement,” said Ms Abbass during the interview with Nation.Africaoutside her son’s room.

His father, Mr Abbass Mwandambo, a long-distance truck driver said his son followed in their footsteps in becoming a footballer. His Uncle Abbass Sumba was a great footballer in Soweto and founded the football club.

“Him being known globally has elevated us, I am proud of my son. I pray for him every day. I never wanted him to travel, I was scared. In the previous attempts we managed to stop him but his time he won over us,” said Mr Mwandambo.

The family hopes the government will help their son after his three months contract comes to an end.

“Many youths are languishing in poverty and hopelessness in Kenya due to unemployment, let’s take them to the Middle East or abroad for work,” said his mother.

His childhood friend Mkala Anzafila, who is also the Soweto FC Captain, said he began playing football with Abubakar when he was in the junior team up to the senior team and said they are proud of him.

“His discipline and respect are what made him great. We pray for him, we know our team will now be known because of him,” he added.

PICK UP FOR SALE IN KENYA

Grieving families in Kenya speak of terrorism rumors before massacre