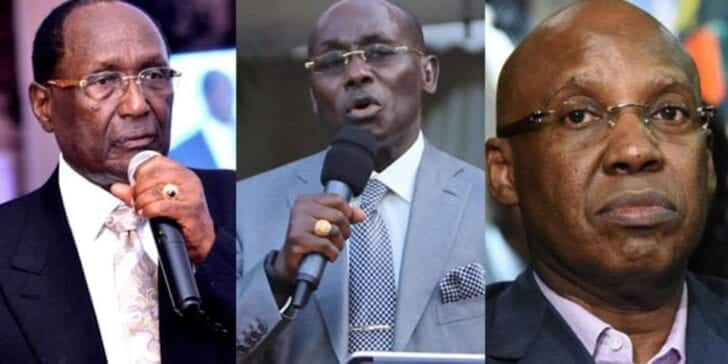 With deep pockets and international networks, they are an asset to any political campaign — the ultimate power brokers.

The wealthy businessmen reportedly bankroll campaigns for top presidential contenders and other candidates for various seats. However, most of them prefer to pull the strings away from the public eye.

The secrecy is sometimes because some hedge their bets with different political camps, so that whichever side wins, they identify with the victors.

However, others have openly declared support, and are actively involved in campaigns by hosting delegations to sell their preferred candidates.

Every region has these tycoons. In places such as Mt Kenya, they have formed an influential lobby that manipulates the political direction.

The Council of Eminent Persons, chaired by the wealthy Mr Joe Kibe, draws membership from billionaires, particularly from Murang’a County.

Billionaire Chris Kirubi has been among the wealthy businessmen, who have had a role in President Kenyatta’s campaigns.

Wealthy businessman Jimi Wanjigi has had key roles in Jubilee’s campaigns in 2013 and thereafter, in Mr Odinga’s presidential run under the National Super Alliance (Nasa) in 2017.

In Ukambani, tycoon Peter Muthoka, who backed the President’s campaigns as well as the Jubilee parliamentary and civic candidates in 2017, is emerging as the region’s power broker.

Mr Muthoka, who runs Acceler Global Logistics, one of Kenya’s largest transport and logistics firms, is caught up in a supremacy tussle with gemstone dealer Johnstone Muthama.

Mr Muthama, a former Machakos senator, for long financed the Wiper Party and backed the opposition Nasa coalition in 2017, but has since had a falling-out with Wiper party leader Kalonzo Musyoka.

In Coast, tycoon Mohammed Jaffer, owner of Grain Bulk Handlers Ltd, has in the past been mentioned as among the financiers of former Prime Minister Raila Odinga’s presidential campaigns.

The trader has never sought a political seat, but his influence in the region’s politics is known, as is that of Mr Abubakar Joho.

Such is the influence of Mombasa Governor Hassan Joho’s elder brother that he is nicknamed “Alpha”.

Mombasa billionaire Suleiman Shahbal, who unsuccessfully vied for the governor’s seat in the past two elections, is also a key player.

In the Rift Valley, prominent figures in former President Moi’s government, wealthy hoteliers and tycoons such as David Lagat, the founder of the DL Group of companies, as well as Mr Bundotich Zedekiah alias Buzeki, reportedly hold sway.

They include the likes of Mr Sam Mburu (alias Kiongozi), a close ally of the DP, Mr Maina Waweru, and Mr Joseph Muya, who owns hotels in Nakuru.

Jaffer and Abubakar Joho call the shots in Coast

Mombasa Governor Hassan Joho’s elder brother Abubakar Joho and tycoons Mohammed Jaffer, Suleiman Shahbal and Hasmukh Patel are among the personalities reported to influence the region’s politics behind the scenes.

The Nation is aware that Mr Jaffer sponsored Mr Odinga in his 2013 presidential bid before they had a falling-out. He supported Mr Omar in his 2017 run for governor, which he lost to Mr Joho.

The billionaire, who is the country’s largest provider of grain bulk cargo handling, is currently close to President Kenyatta.

“Politics and business thrive together. When he finances someone, there must be some future interest,” said a close associate of Mr Jaffer, who also enjoys influence in Lamu County politics.

For his financial and political muscle, Mr Abubakar Joho is nicknamed “Alpha”.

Fondly referred to as Abu, the older Joho has immense clout in Mombasa — from ward to county level politics.

“He has the power that is respected by all and sundry in the region,” said a former employee at the County Government of Mombasa.

In 2017, he hand-picked current county Speaker Aharub Khatri for the seat. He was unopposed.

“I’m being fought by Abu, but I stand with God. There are forces who are forcing me out, but I have stood my ground and I will fight my way in,” said Mr Ali at the height of the election campaigns.

Another person moving things behind the scenes is Mr Hasmukh Patel, the owner of Mombasa Cement Company.

“There is an important philanthropist. It will be unfair if I do not recognise him for the work he has done. This is Mr Hasmukh of Mombasa Cement,” Mr Joho once said of Mr Patel at a function attended by President Kenyatta in Mombasa.