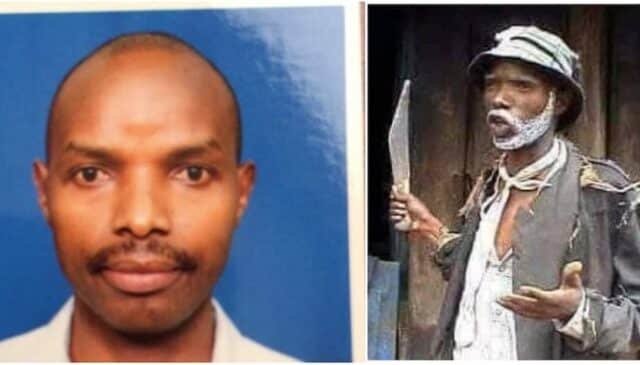 The government has been asked to investigate the disappearance of Kikuyu language comedian Geoffrey Mwangi, professionally known as Kianangi, who went missing five years ago.

His wife, Catherine Njeri, appealed to President William Ruto, Interior Cabinet Secretary (CS) Kithure Kindiki, and Deputy President Rigathi Gachagua to order a fresh look at the file at the Ruiru Police Station and to make the findings public.

The 40-year-old Riverwood comedian left his Kasarani rental home in Nairobi on September 21, 2017, at around 10.30am, ostensibly to visit his ailing mother, whom he told his wife had called asking for him.

He has not been seen since.

Mwangi’s fame peaked in the Mt Kenya audience owing to his hilarious partnership with his co-actor Macang’i (Ephantus Mbuthia). They had kept the region tickled through dramatised productions since 2003.

Ms Njeri says Mr Mwangi called a friend who owned a car to take him home to Gatanga village to take his mother to the hospital.

“The two left saying they were to pick yet another friend. That is the last time I saw him. It has been five years of searching for him with the hope of seeing him, dead or alive,” she said.

She said the friend her husband left with is the one who later called her to inform her that her husband had disappeared.

The vehicle he was travelling in was found abandoned at the Ruiru Bypass roundabout near Membley estate at 4pm the same day. The police report said it was “intact, no suspicious marks on it, just parked and abandoned”.

How the two separated and whether they had picked up the third friend by the time he was reported missing remains a mystery.

A missing person’s report was first made at the Ruiru police station on the night of September 21, 2017, and later at Kasarani Police Station.

Family and friends indicate that they have searched for him in police stations, hospitals, jails and mortuaries in Kiambu, Embu, Kirinyaga, Nairobi, Murang’a, Machakos and Kajiado counties to no avail.

When Nation.Africa started to review the case, it found interesting allegations that could help unravel the mystery of Mr Mwangi’s disappearance.

Apart from his wife, police did not record any other statement regarding the disappearance, not even from the two friends he was with.

The vehicle was later released to its owner and everything around the case points to the police’s lack of enthusiasm to find the missing person.

It was not possible to get his mother’s firsthand testimony whether she had summoned him to take her to the hospital because she died two years ago.

Mr Mwangi was born in a family of four brothers and four sisters. His wife described him as “a man who was stable financially to the extent that he would pay our rent, provide meals and pay small bills”.

He appeared not to have been wealthy enough to attract enemies.

Some people have attributed his disappearance to his acrimonious fallout with his Riverwood co-partner, Macang’i.

But the comedian denied the claims.

“It is true that we had differed and three years to his disappearance, we had legally parted ways and we were individually doing independent productions. There was absolutely no bad blood between us and he remained my friend. I would have zero reasons to wish him any bad tidings and his disappearance also affects me,” Mbuthia told Nation.Africa.

Another interesting fact is that Mwangi’s brother Maina Waweru, who converted to Islam in 2014, also disappeared.

Rumour had it that he had crossed over to Somalia and was recruited into a radical religious fellowship.

It is not immediately established whether Mwangi was keeping in touch with his brother, thus attracting the attention of the security officers or whether he had anything to do with his brother’s disappearance.

In his report, the then Ruiru Division Criminal Investigations Officer Matthew Bett stated that data on Mwangi’s phone indicate that it was switched off at the place where the vehicle was found abandoned.

The case is still pending at the Ruiru Police Station marked “Missing Person Report “and its status is “Pending Under Investigations” (PUI).

There is a curious sentence in the report that reads: “The officer who was driving the vehicle will be called to record a statement once free to do so.”

It gives the impression that Mr Mwangi at some point found himself in the company of a police officer who was indeed at the wheel of the vehicle.

This brings to the fore suspicions that were rife at the time Mr Mwangi disappeared that he had walked into a trap and that there might never have been a call from his mother. But for what purpose?

An officer who was serving in the Special Crime Prevention Unit (SCPU) claimed that Mr Mwangi was a double agent.

“Much as he was famous for his television comedy, he was also involved in underworld activities where he had become partners with serious gangs operating around Kamakis and bypass,” claimed the officer, a position that family and friends vehemently denied.

“As the woman who was in his life and together we had two children, I can  say he was not a criminal and was earning a honest living,” Ms Njeri said.

Mbuthia agrees. “What I know of Kianangi is that he was law-abiding and never harboured any criminal inclinations… I interacted with him even while he was under the influence of alcohol, where he would exercise a higher degree of honesty. There was no indication that he was involved in crime,” he said.

The officer, who seemed to know more than he was letting on, told Nation.Africa: “Go and report that crime does not pay…he was a part-time car thief when not doing Kikuyu comedy… He was picked up one day by someone he knew and the rest is why you are asking me these questions. Had he concentrated on his comedy, the guy could still be eating his githeri as we speak.”

But his wife does not agree. “Why trick him, then make him disappear? Why not take him to court? Why not make it happen in a way that will allow us to see his remains so that we can bury him then close that chapter?” she asked

Ms Njeri said the disappearance caused a lot of stress, leading to the death of his mother and the illness of her father-in-law.

She is at a loss to explain to her children the whereabouts of their father. She cannot conclude that her husband is dead.

“I cannot with confidence say he is alive, either. That forms the great dilemma that I live with.”

She added: “The more I reminisce about this, the more I get convinced that the police have the answer to the whereabouts of my husband and the moment of truth is now,” she says.

Word of the Day:Honoring our Leaders