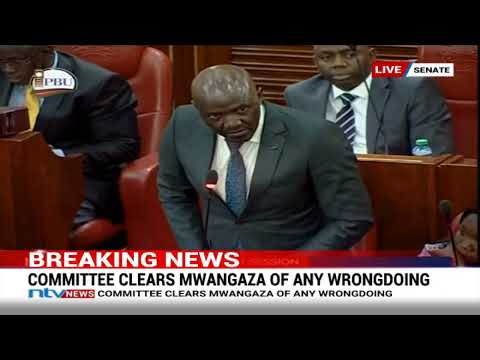 Embattled Meru Governor Kawira Mwangaza has survived impeachment by the Meru County Assembly. This is after the 11-member Senate Special Committee appointed to probe the grounds for her impeachment submitted a report on Friday stating that none of the charges leveled against the Governor by the Meru MCAs was proven.

The Committee’s Chairperson, Senator Boni Khalwale, submitted before the Senate that the committee had voted unanimously in its decision to overturn Kawira’s impeachment.

In view of the committee’s findings and in line with the Senate Standing Orders, Senate Speaker Amason Kingi ruled that the probe report was by extension a finding of the entire House and hence there would be no further debate on the matter.

“Honorable Senators, the committee has found all allegations against the Governor not to be substantiating… Therefore, the matter of impeachment of the Governor of Meru is now put to rest… We cannot purport to debate the report, the committee that came up with that report is a creature of this House, by extension it is the Senate that came up with that report,” said the Speaker.

He added: “Having pronounced itself through that report, the Senate now stands functus officio… you cannot debate your own decision.”

During the proceedings on her impeachment before the Special Committee, Governor Kawira took to the witness box and denied the 62 allegations leveled against her among them nepotism and irregular appointments, abuse of office, and gross violation of the constitution and other county laws.

If the Special Committee had upheld Kawira’s impeachment the report would have been debated in the House for members to vote and determine her fate.

However, with the overturning of the impeachment, Mwangaza now resumes her duties as the third governor of Meru County.