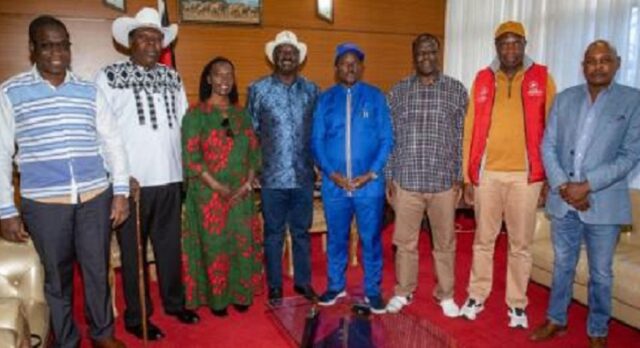 Former Prime Minister Raila Odinga was criticised for not acknowledging President William Ruto as the elected head of state at his Kamukunji rally.

While sharing divergent views on the Azimio la Umoja rally held on January 23, key allies questioned whether there was a plan and a clear strategy to counter Ruto.

In a statement, Kanchory advised Raila to give a clear way forward to his supporters, expressing that it would be difficult for his demands to be attained.

“Baba should give a clear way forward or hold his peace. Kenyans don’t have time for silly games,” he asserted.

In his demands, Raila had called for an audit of the 2022 General Election.

On the other hand, former Mukurweini MP Kabando wa Kabando, a key ally of Narc Kenya leaders, wondered if all constituent parties had been consulted before the pronouncements.

The former legislator insisted that he recognised Ruto as president, given that the Supreme Court had settled the matter.

“On Raila’s Azimio resolution, not to recognise Ruto’s presidency, there are two questions on constitutionalism and the rule of law.

“Did Azimio Chairman (Uhuru Kenyatta) endorse it? If he did, can he retract his handover sword? And secondly, when and where were Azimio affiliate parties consulted?” he posed.

Raila’s criticism also emanated from the Kenya Kwanza side as several leaders claimed that the ODM boss was angling for another handshake with his arch-rival.

“All those elected under ODM, and declared winners by IEBC should resign. Otherwise, this is Fiction and too much ado about nothing,” Former Soy MP Caleb Kositany commented.

The meeting came amidst plans to have Karua poached from Azimio. Deputy President Rigathi Gachagua tasked Kirinyaga governor Anne Waiguru with the mandate.

“Waiguru, I do not know what you can do to help because there is something a miss; she has been brainwashed. The same thing that happened to Uhuru is repeating itself with her,” Gachagus stated.