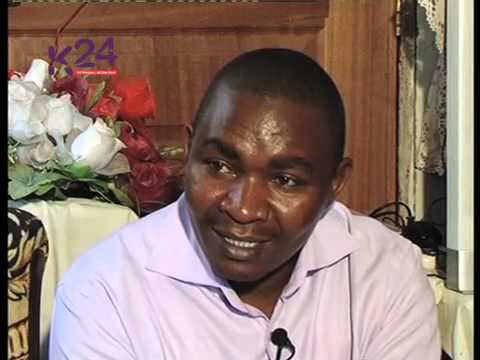 Their love caught the attention of the nation when they tied the knot nine years ago.

Humour, awe and shock characterised the controversial love affair between Wambui Otieno, then 67, and Peter Mbugua, a humble man from Gilgil then aged 29.
When the fiery Wambui died of a heart disease at the Nairobi Hospital on August 30 last year, the curtain fell on one of the most notable love affairs in Kenya’s history.
More Related Stories
NEWS

And, as Wambui’s family marked the first anniversary of her death this week, the Sunday Nation has reliably learned that Mr Mbugua has been declared persona non grata and no longer has access to any of the matrimonial homes he shared with the love of his life.
In fact, Mr Mbugua lives in a one-room house in Kitengela on a property originally owned by Wambui.
Mr Mbugua, who left a young lover to marry Mrs Otieno, cannot set foot in Wambui’s Karen home where they lived for several years after the much-publicised wedding in 2003.
He would also be an “intruder” at Wambui’s rural home in Upper Matasia in Ngong, where she was buried. This is the home where Wambui had wanted her first husband, SM Otieno, to be buried in 1987 “according to his wishes”.
Her demand precipitated an acrimonious legal battle with her husband’s Umir Kager clan which wanted, and prevailed in having Otieno buried in Nyanza. (READ: When Wambui Otieno took the Umira Kager clan by the horns)

Wambui’s daughters have taken over the Karen home. One of her daughters, Sophie, who had lived in South Sudan for some time, is now in charge. Sophie was curt when asked about Mr Mbugua’s whereabouts this week.
“I would not know where that man is. It is long since he was last here. They (Wambui and Mbugua) had left even before her death,” she told the Sunday Nation at the home on Thursday evening. Sophie said there was no contact between the family and Mr Mbugua.
“I do not even have his mobile phone number. No one has it here,” she said. There were several farm hands around the gated homestead. Some old cars were parked in the compound.
In Upper Matasia, where Wambui was laid to rest next to the empty grave in which she had hoped to bury her husband, Mr Mbugua is largely unknown.
The Sunday Nation found a new family living in the house. We established that the family had rented the house. The man of the house, who gave his name only as Obola, said he had never met Mr Mbugua and had only seen his pictures in newspapers.
“All I know. . . as far as this home is concerned is that it is managed by Wambui’s son. I do not know any other person,” Mr Obola said, asking to be left out of the family issues.
Mr Mbugua and Wambui’s children are embroiled in a tussle over property and the dispute seems headed to the courts.
After days of hunting for him, we found a besieged man who claims Wambui’s children have “dishonoured my wife’s wishes”.
The estates
“Yes, they have locked me out of the estates yet Wambui had made it clear how she wanted her estate to be shared,” said Mr Mbugua when we located him in Kitengela on Friday.
He claimed some family members had falsified his wife’s thump prints when she was ailing. But he retained a car they had bought together.
Like Wambui’s fight to have her husband’s burial wishes respected, Mr Mbugua has what he calls a comprehensive legal battle to honour his wife’s wishes on matrimonial property.
The Sunday Nation was told that a case will soon be filed by veteran lawyer Judy Thongori. “We have written to them asking for an out-of-court settlement. They have ignored (it). We shall meet in court. I am ready to defend my wife’s Will,” Mr Mbugua said.
It is not yet public what the Will contains, but Wambui had told this writer in a 2008 interview at her Karen home that she had “taken care of Mr Mbugua’s interests” the way he had done hers.
Ms Thongori confirmed she would be acting for Mr Mbugua in the suit expected to set a precedent on the rights of husbands to their wives’ properties.
The former stonemason says he gave Wambui the best companionship she could have got and his sacrifice, he believes, made Wambui’s final years happier.
He and Wambui first married at the Attorney-General’s office in 2003. Last year in February, they solemnised their union at the PCEA St Andrew’s Church in Nairobi. (READ: Wambui and Mbugua cap marriage with church wedding)

Video:KQ’s new Dreamliner spotted in US