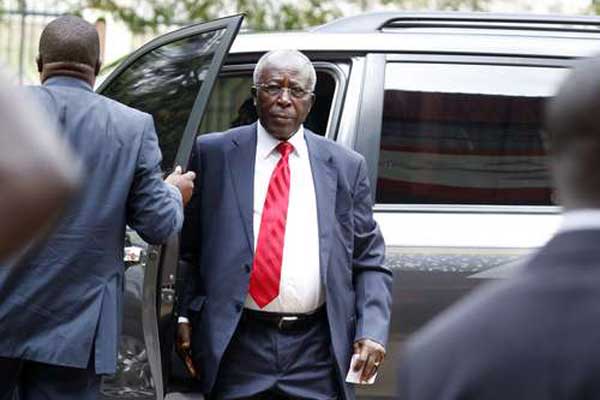 Foreign Affairs Minister Prof Sam Ongeri on Monday criticized the European Union diplomats in Kenya accusing them of making inflammatory remarks meant to influence the outcome of the March 4 elections.

Prof Ongeri who spoke moments after holding a closed door meeting with 25 EU ambassadors and high commissioners said that Kenya is concerned about contradictory statements being made by foreign powers regarding the elections.

He accused some diplomats from the EU of operating as if their countries had preferred candidates in the coming elections.

He warned that the remarks had raised doubt on the capability of the EU to deliver a non partisan view through its elections observation group already accredited by the country.

He said that he had summoned the EU diplomats to clarify the true position of some statements issued by members of its delegation last week which were aimed at threatening Kenyans to vote in a certain manner in the coming elections.

The ministry had dispatched a note verbal to the EU envoys and another one to the US ambassador over the weekend seeking clarifications over statements warning that Kenya could face some “consequences” depending on the outcome of next month’s elections.

“The remarks made by EU envoys are clearly inflammatory and could have the effect of polarising the country. Indeed, these elections are heavily contested and statements warning Kenyans that the poll results are in favour of certain candidates would have consequences could amount to taking sides,” Prof Ongeri told the diplomats.

The meeting between Prof Ongeri and the EU diplomats failed to reach an agreement on the demand that an apology be made and that further threats be stopped forthwith.

Prof Ongeri accused the foreign diplomats of attempting to interfere with the ongoing electoral process in Kenya and questioned the involvement of the EU commission observation group which has been accredited by the Independent Electoral and Boundaries Commission (IEBC) to operate in Kenya.

“Such overt partiality displayed openly by the EU envoys, in our view constitute a serious breach of the IEBC’s code of conduct and must be censured,” he said.

Head of EU delegation Mr Lodevijk Briet told journalists that their countries hadn’t threatened sanctions yet but maintained that they are keen to maintain future cooperation with the International Criminals Court (ICC).

“The word sanctions is yet to come from us. We are hoping for a violence free elections and we have restated our support for the ICC process and to the government of Kenya to deliver a free, fair and democratic elections,” Mr Briet said.

“The prospect of international sanctions is a sword of damocles ominously hovering over Kenya. Our economy is heavily dependent on euro-trade anchored on pillars like tourism and the core agricultural exports of cut flowers, tea and coffee,” Mr Namwamba said.

Namwamba warned that the threatened sanctions would lead to massive job cuts and ruined livelihoods.

Photo of Churchill with his son in Church goes viral

ICC to rule on Ruto’s presence at trial on Friday