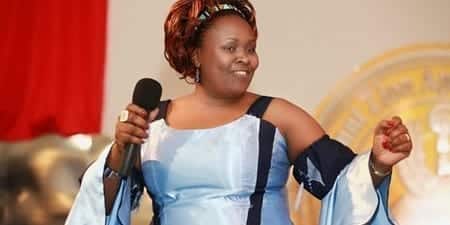 A Nairobi gospel artiste known for the hit Pambazuka na Yesu wants to divorce her bishop husband. PastorJoan Wairimu Githuku and her husband have both filed cases in court accusing each other of adultery.

Pastor Wairimu has initiated the case at a Nairobi court where she seeks orders of separation.

But her husband, Bishop William Musyoki Mwangangi, has filed a cross petition asking the court to dissolve the marriage. The couple got married in 1996 in church.

But the two have recently been engaged in counter accusations over the divorce case, which is yet to start.

The accusations range from cruelty, adultery, watching of pornographic movies, denial of conjugal rights and issuance of death threats.

Pastor Wairimu is a gospel musician known mostly for her song Pambazuka na Yesu, which is popular on YouTube and is often downloaded as a ringtone by many Nairobians. She also runs Pambazuka Production and Queens Ministry.

Bishop Mwangangi, who is the head of Jesus Manifestation Church in Githurai 45, accuses her wife of denying him conjugal rights since 2009.

But Pastor Wairimu claims her has had many adulterous affairs with known and unknown women causing her to suffer great embarrassment.

She has listed five women including house girls she claims her husband has slept with since 1996.

She claims the bishop has sired a child out of wedlock as a result of his adulterous actions, but the bishop denies the accusation.

Bishop Mwangangi on the other hand claims that his wife, who recently moved out of their matrimonial home in Muthiaga North, has denied him his conjugal rights for the last five years.

He further denies that he has been exposing their three children to sexually explicittext messages and nude pictures of his lovers. The claims, he says, are imaginary and meant to malign him as a man of God.

“To the contrary, it is the petitioner (Pastor Wairimu) who has been watching pornographic movies in the house at night in the name of copying sexual styles whereas she has denied the respondent his conjugal rights for the last five years,” the Bishop alleges.

He says his wife has been cruel to him to the extent that she slept out of the matrimonial home without informing him and the children of her whereabouts. He has also linked her to various adulterous actions with some men since 2006. He claims the wife on several occasions made sexual advances to their shamba boys and a driver. Those who turned down the advances were sacked, the bishop says.

One of the drivers has filed an affidavit as a witness in support of the bishop’s case claiming that Pastor Wairimu made advances to him in April when her husband was away in South Africa for a mission.

She is also accused of bringing her lover to the matrimonial home for a sleepover in 2006.

Pastor Wairimu has also allegedly issued death threats to her husband telling him that he would kill him through food poisoning.

“Subsequently on July 29, 2013, the petitioner sent the respondent the message, ‘Baba X (name of their child omitted by The Nairobian), I will make sure that you will be a dead man’,” claims the bishop.

But the bishop is also accused by the wife of issuing many death threats to her and making her live in fear and causing her mental anguish.

Pastor Wairimu claims the husband on July 5 threatened her and she made a report to the police. The bishop was summoned by police and made to record a statement. He denies making death threats to the wife.

She further claims that the bishop has been verbally abusive  and has physically assaulted her throughout their marriage.

The bishop, she alleges, has been rude arrogant and very demeaning to her in front of the children, housegirls and their relatives.

Pastor Wairimu accuses the husband of failing to take up his parental responsibility over the children and instead living a splashy and wasteful lifestyle, spending hundreds of thousands on expensive shoes, perfumes, and watches while the children’s upkeep has not been catered for.

The man has also allegedly not shown her love, even when she was involved in a tragic road accident making her feel unloved.

Bishop Mwangangi in turn accuses the wife of abdicating her role as a wife “five years ago by refusing to cook, do the laundry, clean the bedroom and all other role that pertains to a wife exposing the respondent to a lot of stress and turmoil”.

He claims her wife has on many occasions incited the congregation to move from church and go worship elsewhere alleging that the husband is not a man of God.

The parties are waiting for allocation of hearing dates by the registrar.

VIDEO: Uhuru’s full speech at the launch of the SGR Train in Mombasa

Why Ruto is courting Museveni and Kikwete