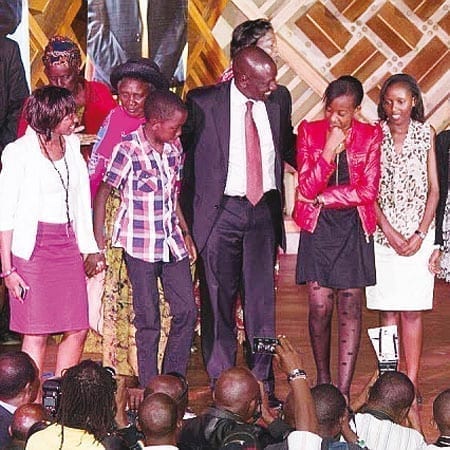 OFFICIALS have denied reports that the daughter of Deputy President William Ruto has been appointed as deputy ambassador.

However officials at the Ministry of Foreign Affairs and the Office of the Deputy President confirmed that his daughter June Ruto has recently joined the ministry in Nairobi.

Social media has been alleging that Ruto’s daughter is a second year university student and is about to become deputy ambassador to Sweden.

“It is not true that she has been posted as a deputy ambassador. In fact, she is a very junior officer working as an international relations and trade officer under the America directorate at the Ministry of Foreign Affairs,” said an official from the ministry. June Ruto accompanied her father to the Hague last year for some sessions of his trial at the ICC.

The social media has been abuzz with reports that the deputy president has pushed for the appointment of his daughter as a deputy ambassador in Sweden.

Social media claimed that Ruto had instructed that the name of his daughter should not to be included in the soon to be released official list of diplomats posted by Kenya to foreign countries.

“We know who are spreading these rumours. It is for a political purpose, there is nothing like that,” said an official at Ruto’s office. Despite the denial by the government officials, the alleged appointment has caused ripples in Ruto’s URP party.

At a meeting was held in Karen on Wednesday night, some URP party officials accused the deputy president of behaving like former Prime Minister Raila Odinga who in 2010 appointed his sister Wenwa Akinyi Odinga as the Consul General in Los Angeles. At the time MPs complained that other Kenyan diplomats were related to top politicians.

On Wednesday, URP officials allegedly complained that some party members who vigorously campaigned for Jubilee in the last elections are still out in the cold while “undeserving persons” are being given government jobs.

President Uhuru Kenyatta and his deputy are finalising a list of new ambassadors and deputy ambassadors. Several Kenyan embassies have been operating without ambassadors for months now. All ambassadors nominated by the president should be vetted and approved by parliament before posting.

“The president must nominate persons whose names will not have difficulties in Parliament. Identifying these people and issues of regional and gender balance could have caused the delay,” said the ministry of foreign affairs official.