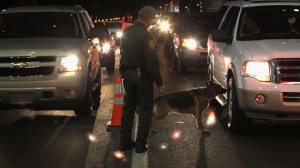 A push for a new tool to aid federal immigration agents in their hunt for fugitive undocumented immigrants and criminals has some privacy rights observers nervous that the agency is becoming a little too big brother for its liking.

The federal agency tasked with arresting and deporting undocumented immigrants, U.S. Immigration and Customs Enforcement, put out an official request last week for contractors to submit bids for commercial technology that would help the agency its law enforcement officers tap into the National License Plate Recognition Database, or NLPR.

“The database should track vehicle license plate numbers that pass through cameras or are voluntarily entered into the system from a variety of sources (access control systems,asset recovery specialists, etc.) and uploaded to share with law enforcement,” the request for proposals stated.”NLPR information will be used by DHS/ICE to assist in the location and arrest of absconders and criminal aliens.”

The technology that ICE wants developed for the agency would allow agents to use smart phones to quickly snap a photo of a license plate and quickly determine the plate is on a “hot list” of “target vehicles.”

License plate readers, however, would automatically record information on all vehicles that cross their paths instead of just suspect vehicles.

“This system is supposed to be for the Immigrations and Customs Enforcement branch of DHS, for the tracking of illegal immigrants,” said J.J. Green, a national security correspondent in Washington D.C. for WTOP radio.

The agency noted that the system would help in locating criminal undocumented immigrants on the lam “and will enhance officer safety by enabling arrests to occur away from a subject’s residence.”

While the specifics of how the smart phone application would works depend on who wins the contract, ICE said it wants a system that works with iPhone, Android or BlackBerry devices.

Despite ICE guarantees that the “the database could only be accessed in conjunction with ongoing criminal investigations,” there are concerns that the system will breach privacy laws and could lead to discriminatory tracking.

While this type of system is used extensively throughout the United Kingdom and in some law enforcement agencies throughout the U.S., groups like the American Civil Liberties Union still see it as going down a dangerous road toward breaching privacy rights.

“The knowledge that one is subject to constant monitoring can chill the exercise of our cherished rights to free speech and association,” a 2013 report by the ACLU stated. “If not properly secured, license plate reader databases open the door to abusive tracking, enabling anyone with access to pry into the lives of his boss, his ex- wife, or his romantic, political, or workplace rivals.”

Experts added that in light of the recent National Security Agency spying revelations, the public has become extremely wary when it comes to any type of government monitoring of civilians.

“There are some significant concerns,” Green said, “and probably rightly so, in light of the Edward Snowden revelations, that it could be used for something other than what it’s intended for.”